*UPDATE: We did the 2 hour buffet the other day - $69 for unlimited orders off of their buffet menu. The menu items look (mainly) the same as the a la carte dishes, but it's noticeably not as tasty as the equivalents on the a la carte menu. In short - not as well-marinated, lower quality cuts.*

Rengaya is a new favourite of ours, especially when we're craving a post-movie Japanese BBQ feast. You can't be last minute when visiting on a Saturday night, though, as walk-ins are often turned away. The Boy's a fan of Yakiniku's range of restaurants, but the comfortable decor, large tables and good service have set this particular North Sydney branch apart. Little courtesies to make us feel more at home such as bringing us steaming hot towels instead of pre-packed wet wipes (though I love receiving those as well!) helped to stamp in a really good impression, and we weren't let down by the food either.

On our first visit, I thought the two of us would manage about 5 plates of meat, and I think if it were two girls and a serving of rice dishes, there might be a chance that that amount would suffice. The Boy doesn't like rice with his Japanese BBQ though, and we've gone through a minimum of 10 plates of meat each visit.


I know many people are put off by the concept of Japanese/ Korean BBQs because you pay a lot to cook the meat yourselves, and obviously you're not going to return if it's tough and bland when you can make it better at home. So far, we've found the meat to be marinated really well, with a wide range of average to premium cuts of wagyu. Many of the BBQ dishes also enable you to choose between two flavours, such as BBQ sauce and salt and pepper.

Rengaya explains that regulations compel the use of disposable mesh grills, so after an hour or so of use we've found that the grill turns black and loses shape - but usually one of the waiters or waitresses walking by will notice it needs to be changed before we have to ask.


The oysters are fresh, tasty and quite large.


Be warned, the chirashi-sushi is a full meal in its own right. We ordered a "small" portion (a large portion feeding 4) during our most recent trip because I thought it would be nice to eat the BBQ meat with some rice, and because the Boy pretty much left it to me to eat up, it took away my appetite. As a chirashi-sushi typically is, it's very colourful from the topping of sashimi and salmon roe. Quite tasty.


It's fast becoming a tradition of ours to order 5 plates of BBQ scallops. It can be hard to grill them right, and it's important you dial down the heat of your BBQ because it's easy to overcook them and have them stick to their shells. Rengaya alternates between capsicums and corn when garnishing them - order enough scallops/ prawns and you won't have to order vegetable sides. 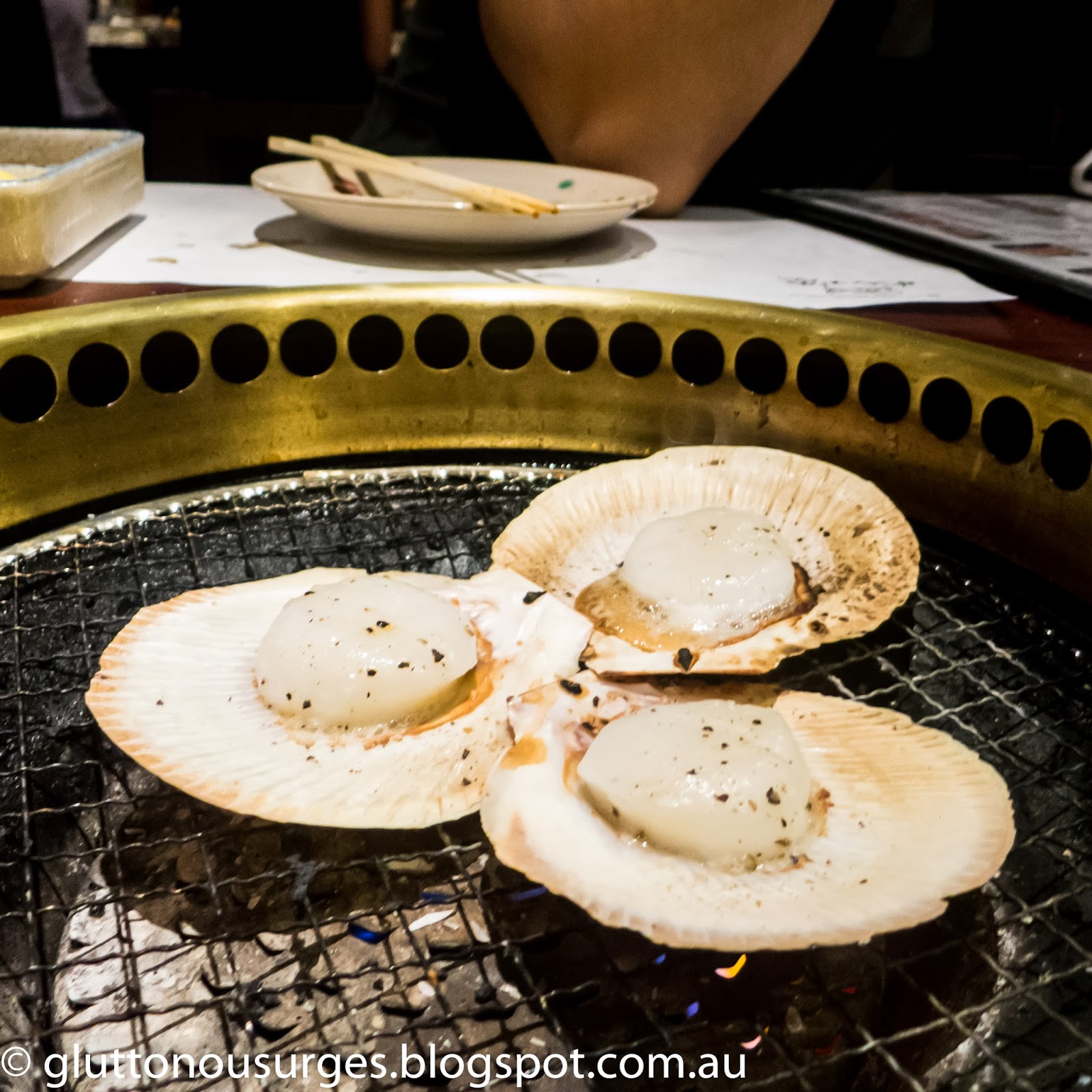 Not a fan of the BBQ prawns - I'm lazy and don't like de-shelling them :P


Were I to choose between the Premium Pork Loin and the Premium Pork Ginger Loin, I'd go with the original non-gingery one. Although I usually love ginger in my food, there's something about that ginger sauce that puts me off.


"Foil-yaki" mushroom is another favourite of ours. It's basically mushrooms in garlic butter sauce. You place the entire lump of foil on the BBQ and let it sizzle. Expensive for such a small amount of mushrooms, but it's so tasty...


The wagyu beef rib is pretty standard - I liked it, but it can be chewy.


Of their dessert menu, we've only had their ice creams. I think the safer options like black sesame are still tastiest - shiraz was a bit of a miss for me.