I'd never thought I could overdose on sashimi - until now. We normally consume it as a side dish or as an entree, but we just couldn't resist the 32 piece deluxe sashimi platter at Tatsuya, a Japanese sushi bar in Artarmon.

We weren't entirely sure what all of the sashimi pieces were, but starting from the most obvious, there were bits of: Octopus, salmon, salmon belly, tuna, and (possibly) kingfish/ kingfish belly. They were all fresh and tasted delightful with the young ginger and squeezed lemon, so no complaints there! We ended up polishing off all but 5 slices (which is completely excusable, as we'd also ordered a plate of sushi!)

That plate of sushi was a volcano roll, containing tuna, avocado, grilled salmon (on top), and a drizzle of spicy sauce. It tasted good but the tough seaweed was quite off-putting, which is why I don't usually order rolled sushi.


They give everyone a bowl of miso soup and we ordered some sake as well.

How we got there

Our visit to The Treehouse Hotel was purely accidental. We'd finished touring Sculpture by the Sea, wanted to have dinner on our side of the Bridge, and decided to check out Rengaya in North Sydney. We ambled inside but were regrettably turned away - they were booked out for the night :(


Our hunger pangs were hitting us pretty hard and, it being a Saturday, there weren't many options around North Sydney station. For a moment, I thought that we'd have to retreat to the nearby Hungry Jacks, but soon recalled passing a restaurant that had been perched grandly at the top of a flight of stairs. At the time, I'd glibly called it "cute" and thought it might make a romantic dinner spot, with its potted plants and timber furniture. Gleeful that we had this as a back-up plan, I dragged the Boy off to The Treehouse.

The Treehouse is separated into 3 sections:
When we entered the restaurant, it was difficult to get the attention of any of the waiters, which was a little odd because we were the first patrons to arrive for dinner and, though the bar area was filled with people, no table service is available to them. I guess they were all busy with the event on the Terrace... Having said that, once we managed to locate someone to seat us, service was fairly smooth for the rest of our visit.

I've got to say, I really loved the soft ambience created by the glowing lamps and whimsical decor - if this were the Sims, my Environment bar would probably be maxed out!


To start, we shared a dozen fresh oysters, served with lemon wedges and a gingery mignonette sauce. No complaints - oysters were indeed fresh, and that acidic accompaniment was delicious.


We also indulged in a couple of cocktails, both of which were a tad more sweet than alcoholic - no less enjoyable though!

I had the gnocchi for my main. These starchy potato pillows were lightly pan-fried and served with large prawns, peas, leek and sage brown butter for moisture. This could have become too oily, but they got the balance just right. Thankfully, the portions were sizable and they weren't stingy on the prawns :)


The Boy ordered a medium steak - Tassie grass-fed eye fillet with cafe de paris butter. I didn't dare eat into his portion, since steaks at restaurants always look so tiny, but he gave it a grin and a thumbs up. I did try the fries, which were prettyyyyy good.

I wouldn't mind coming back for a hearty comforting meal, but given the menu isn't particularly innovative, it's unlikely I'll return for a while. 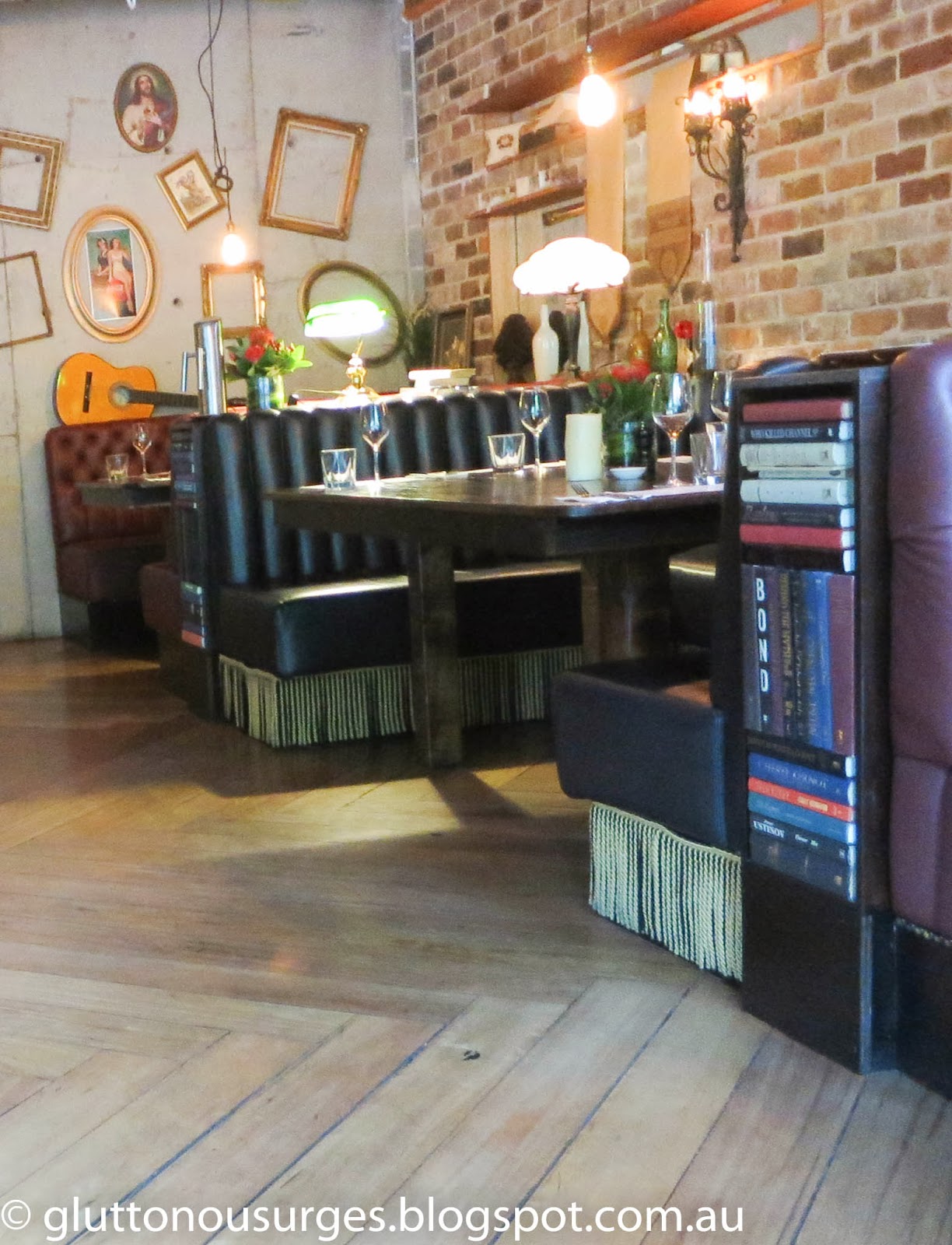 I have a bit of a love/hate relationship with Bulgogi. My dad and I have been visiting them regularly over the past few years for their lunch specials (Dad gets cravings for seafood udon), but whenever I order beef-related dishes, I know there's a chance that the meat won't be great. One day, I saw Bulgogi was offering $29.00 Groupon vouchers for their Korean BBQ Wagyu Samplers for 2 with 2 bowls of rice, valued at $73.00. Not having tried their BBQ, I gave into my curiosity.

Barbecuing there is a little awkward, as the BBQ grills are not built into the tables, but are separate apparatuses. This meant there was limited room for anything else on our table for two. Metal pipes are situated over the BBQ grill to suck up any greasy BBQ smells.


The Wagyu Sampler consisted of 4 slices of each of the following:
Most of the meat was marinated nicely, but the cuts ranged from mouthwatering and tender to tough and suspiciously not so fresh. It's this inconsistency that puts off a lot of people, particularly those who decide not to give Bulgogi another chance after a negative experience with the meat. 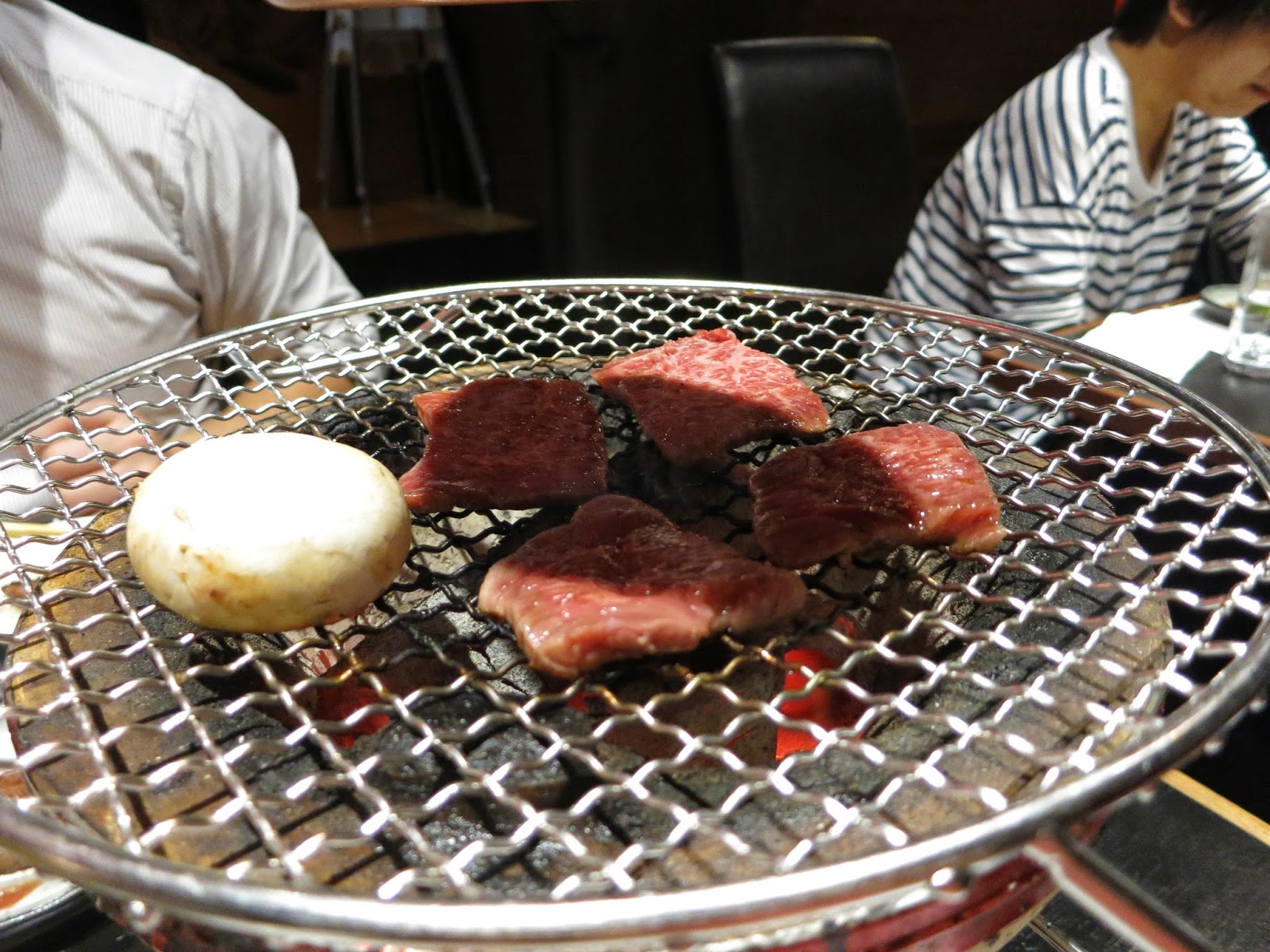 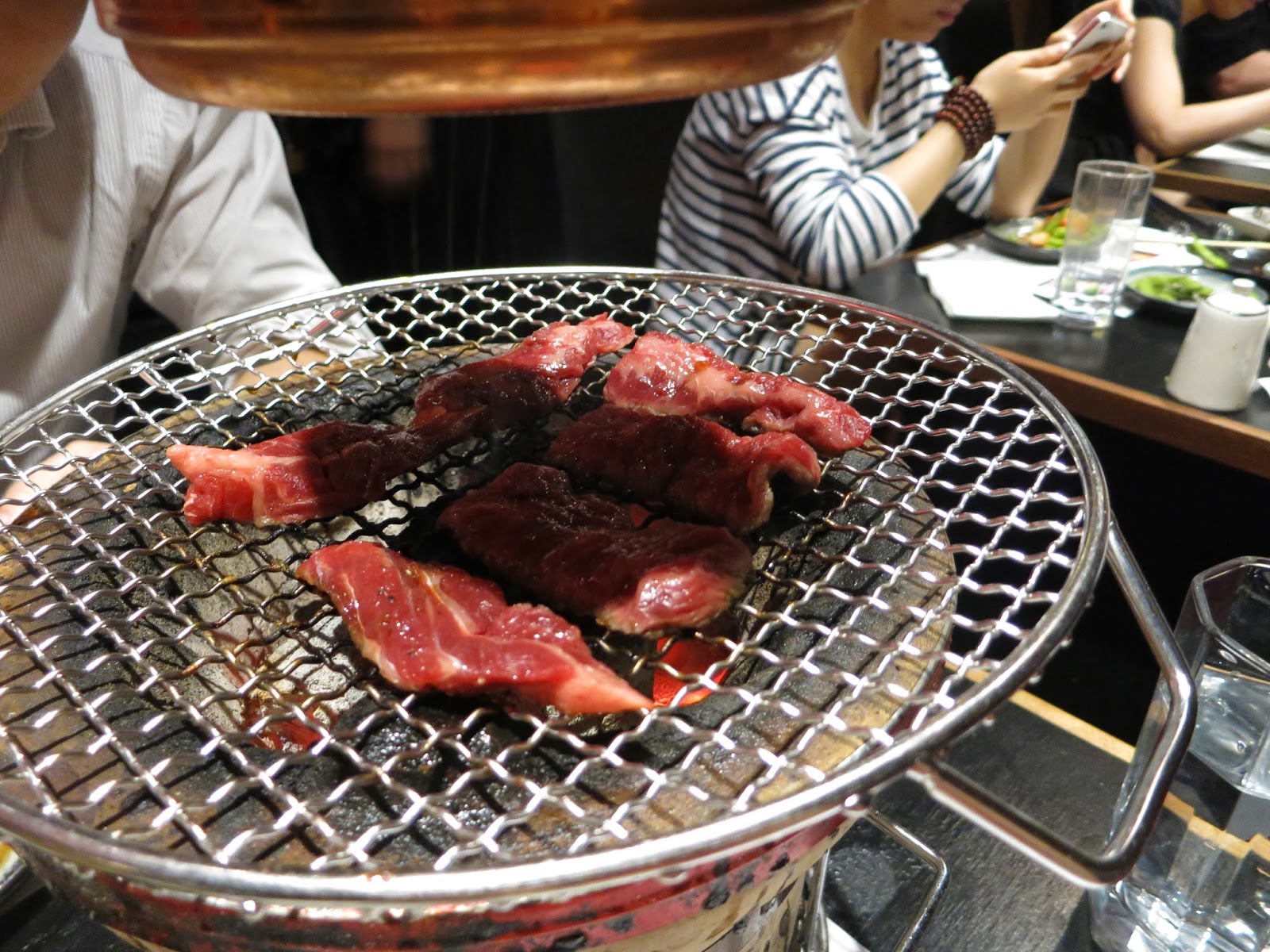 Portion-wise, the Wagyu Sampler for 2 is more like a Wagyu sampler for 1.5. Or 1 person with a big appetite. We were still peckish after finishing it off, so we ordered a round of beef tongue and soft shell crab salad, since even I was starting to crave a bit of vegetable.

The beef tongue was a little tasteless, but wasn't bad after allowing it to caramelise a fair bit (i.e. until crispy around the edges).


The soft shell crab salad was pretty good because of the generosity of soft shell crab, deep fried until golden and crunchy. The mixed salad underneath was bathed in a light balsamic vinegar dressing.


I wish I knew the one really tender cut of beef that was in that platter, as we really wanted to order another one of those. Too bad all the beef looked the same to our untrained eyes.

Having trudged through 26 days in a row of uni classes (i.e. no weekends!) and battled through 3 final assessments, I'm finally starting to see the light at the end of the tunnel. Amidst all of that learning, I drowned my sorrows in eating - more particularly, in those new honeycomb Magnums with their crisp, nutty, chocolate exteriors... Sadly, there was minimal time for Good Food Month. I did, however, manage to sneak in one lunch at Black by Ezard in the Star with CC.

The deal? 2 courses with a glass of wine/ beer/ mineral water for $38.

CC asked about the cost of adding on a dessert, but the waitress, with a cheeky wink, suggested that one of us order an entree/ main and that the other opt for the main/ dessert combination. We're glad we followed her tip, as the portions were pretty substantial considering it was a fine dining restaurant.

Complimentary bread took the form of a mini loaf served with (unsalted) butter and a sprinkle of salt. Though a little dry, it still bore the trademark buttery richness and soft textures of brioche. As far as breads in restaurants go, this was probably one of my favourites due to the novelty and taste. When offered a second loaf, I was sorely tempted to accept. However, my appetite felt a little suppressed that day and so I reluctantly declined. I realised later that I'd overlooked the fact that CC might have wanted some. Social faux pas aside, she mentioned later that she was glad we didn't have that second loaf.


The entree was a pretty assembly of thinly sliced kingfish, sesame custard, edamame puree and chardonnay & shallot dressing. Flavours reminiscent of dried seaweed suggested Japanese cuisine, in contrast to the encrusted dollops of... cheese? Pulps of sweet citrus added little bursts of moisture with each biteful - CC thought it might be grapefruit, but surely grapefruit would have been noticeably sour. In any case, it was a fun dish to polish off.


The chicken was a surprise for me, as it's one of those ingredients that I'm so used to eating that it kind of fades into the background of the menu. The pungency of charcoal from the use of the wood-grill, creamy farro risotto, blueberries and mushrooms made for a really comforting meat dish. Chicken is boring no longer.


We finished off with a sphere of chocolate ganache that was situated on crushed chocolate biscuit and raspberries. Liquid chocolate was then poured over the top to reveal a scoop of mint ice cream. CC voiced my inner sentiments in her exclamation that "the mint ice-cream doesn't taste like toothpaste!"


It's a pity that Black removed their tasting menu, but I'm definitely keen to return.