I was introduced to the Moody Chef cafe by various family members, and I've always been pleased by its fresh ingredients and comforting breakfast/ brunch menu items. More recently, I took a friend there for a long-awaited catchup, and, once again, we weren't disappointed.

It was a little hard to catch the attention of the waitstaff, but once we did, service was friendly and without problems.


I decided to pass on a coffee and have a fruit drink with my breakfast - their breakfast menu is happily available all day on Saturdays.

The "fruit-o-licious" is a little on the pricey side, but is indeed packed with fruit. If not for the crushed ice, it would probably have been too thick to drink! Think of nudie juice, frappe-style, with hints of banana and honey - it was hard to pick out what else was inside that amalgamation of sucrose!


I took the opportunity of ordering a breakfast item that was on special - the crab cakes. As you can see from the background, my friend copied me and did the same =.=

Each plate contained 3 crab cakes with 2 poached eggs on top, accompanied by a spiced, herby tomato salsa. The poached eggs were runny in the centre, so it was fun bursting the albumen and spreading the yolk all over the crab cakes. The lightly crumbed crab cakes weren't too fishy, even though there was plenty of meat to be had. When accompanied by the salsa, it made for a light, mouthwatering meal. And although they looked deceptively small on the plate, I was quite comfortably full towards the end.

When Ozeki Sushi first opened, I thought it was another one of those over-priced sushi trains (like a certain one on Victoria Avenue that I won't name). And thus, it was only when I obtained a 25% Entertainment Book voucher earlier this year that I decided to pay a lunch visit one weekend. All the prices below are pre-voucher. I can't remember how many plates we ended up getting, but I think the two of us ordered around 12 plates together (we ordered a few repeats of the sashimi and scallops). This sounds like a pretty pathetic effort, but the portions were bigger than expected :/ 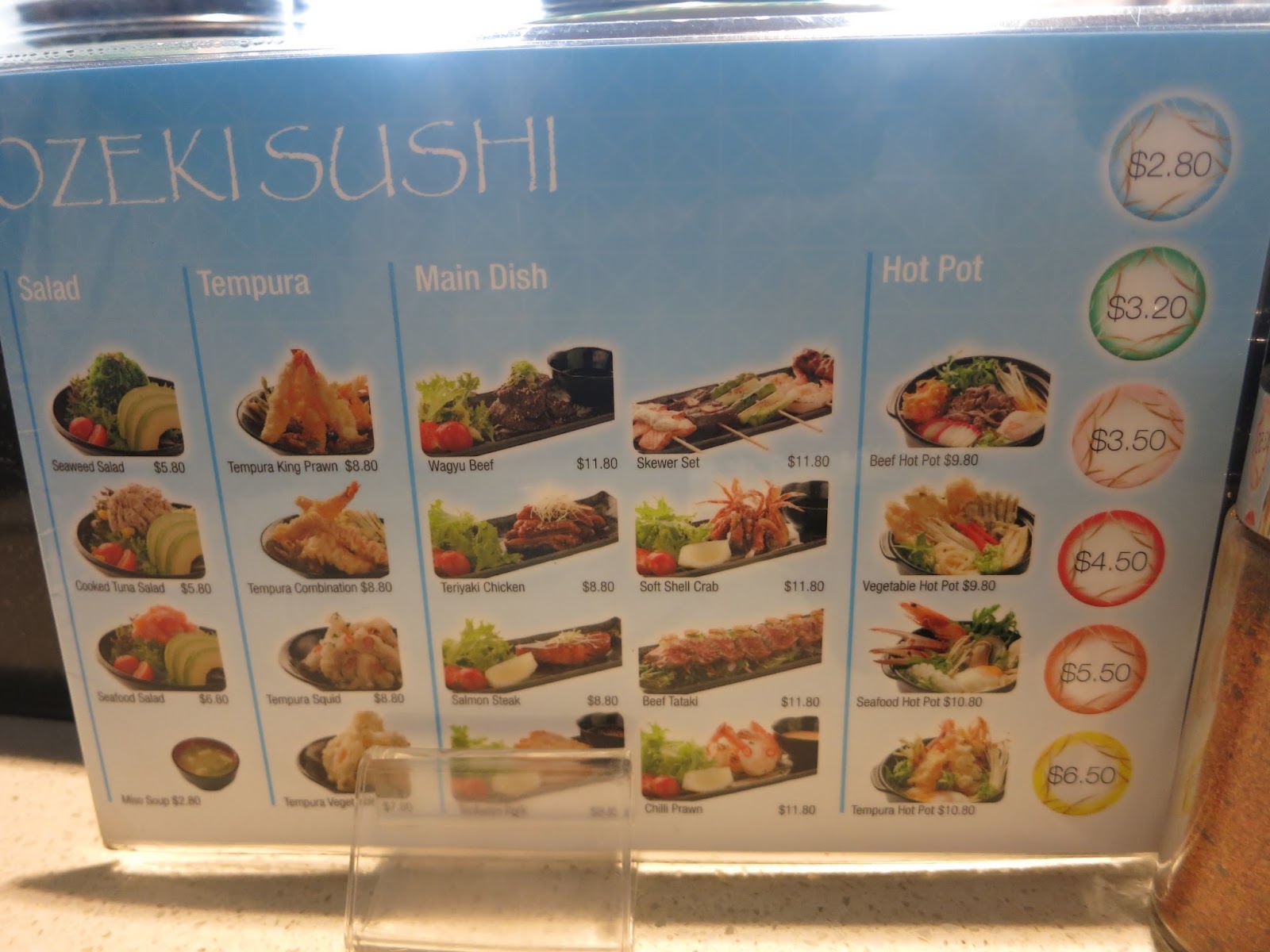 Once seated, I spotted the grilled scallops come by and snatched a plate. Initially, I thought $5.50 was incredibly steep, considering Sagunja charges $2.80 a plate (and is holding a $2.50 special at the moment!), but Sagunja plates contain only 2 scallops while Ozeki Sushi uses 4 (and yes, I know I sound incredibly calculative haha). But how's the quality, you ask? The scallops were fresh and cooked just the way I like it - so they had a smokey flavour and had a great level of firmness.  Needless to say I pigged out on these...


One of my sushi pet peeves is dry rice, and thankfully there was none of that during our visit.


This was my first time having sushi filled with salmon roe. It was enjoyable because it was so moist and I liked the feeling of the little eggs bursting in my mouth (kind of like those fruity pearl toppings that go with frozen yoghurt).


It was also my first time having sea urchin. I don't think it's my thing because it was pretty fishy (and a quick Google search suggests that a lot of people find it offensive - acquired taste I guess).


Overall, a positive experience. There was a wide selection and it's a little pricey, but the portions are fair and it's fresh - given the poor reviews about the freshness during dinner time, perhaps it all comes down to the time of your visit...

Ever since my first visit to London last year, I've been on the hunt for a non-Tex-Mex restaurant in Sydney that is similar to the likes of Wahaca. La Lupita isn't quite up at that level, but with the right combination of dishes, makes for a satisfying meal. On a sidenote, I don't think 4 pound plates of 3 tacos ($7 - 8 AUD) will be the norm in Australia any time soon :(

La Lupita is situated in The Basement, a music club that mainly hosts Jazz musicians. For the Jazz-haters, not to worry! The dining area is quite separate from the live music - except it might be a disappointment for those who want a dinner/ show experience. Having said that, the salsa bar looked very makeshift, with salad bowls to contain each different salsa type - so perhaps this particular arrangement was just for the one night? 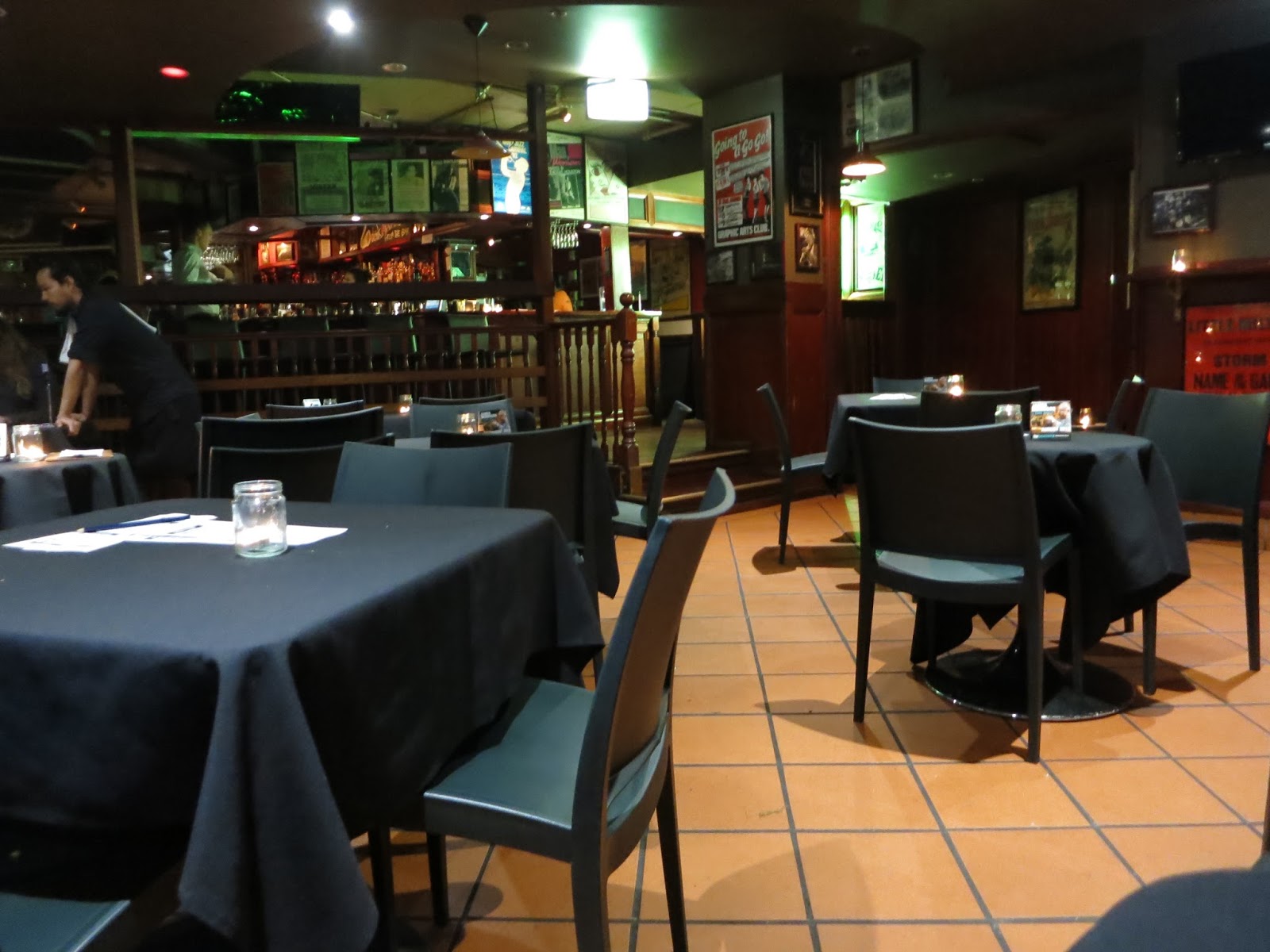 Ordering consists of the following steps:

1. You are provided with a slip of paper (see below) and a coloured pencil.
2. Using the pencil, circle the quantity of each menu item that you wish to order.
3. Hand the paper to either a waitress/ waiter or the bartender. 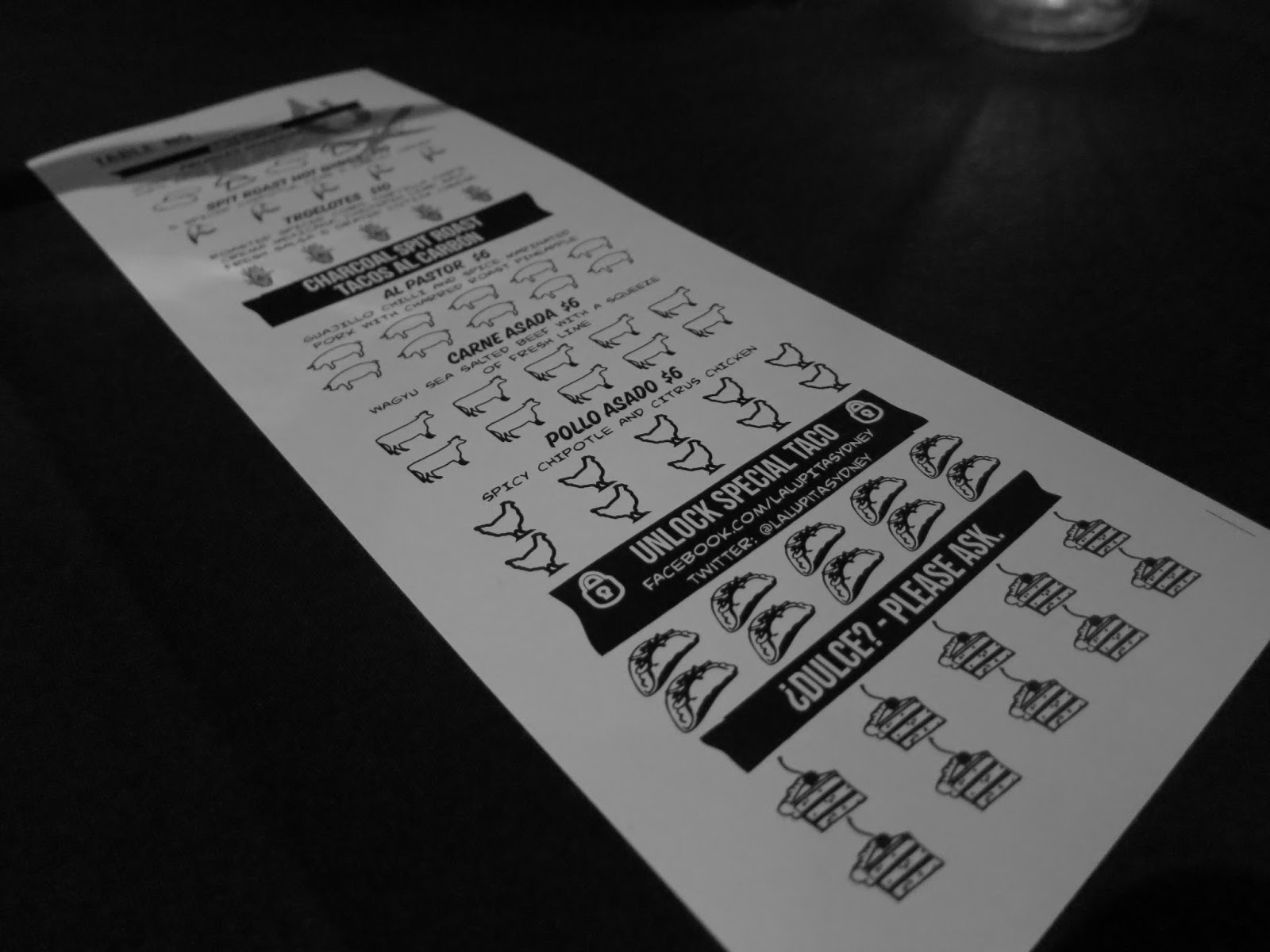 We asked for one of everything, except for the special taco. This turned out to be a fatal mistake because we ended up with two tortilla chip baskets - albeit with different toppings.

If I were to return, I would pick this tortilla basket over the other one. The spiced corn didn't taste very spiced but provided a bit more texture and juiciness that the other basket lacked. The lime was quite dry, so there wasn't much juice to squeeze over the top, but the cheese, salsa and crema mexicana (as well as the corn) made up for it in moisture.

Once again, not spicy. They were still tasty though - the meat on the bones was moist and the combination of the sauce and the charred, smoky flavour provided a bit more complexity.


At $6.00 each, the tacos seem a little steep. They are a little bit bigger than some others I've seen, which somewhat made up for it. One was pork, one was beef and one was chicken. Aside from bearing their respectively different meaty textures, I couldn't distinguish between their accompanying marinades. Slathered with salsas and toppings of our choice, though, we were pretty happy.

As much as I adore frijoles, there was a bit too much starch and not enough of a spicy kick. It's still worth a try if you're into your legumes - there just isn't that much to say about it :/ 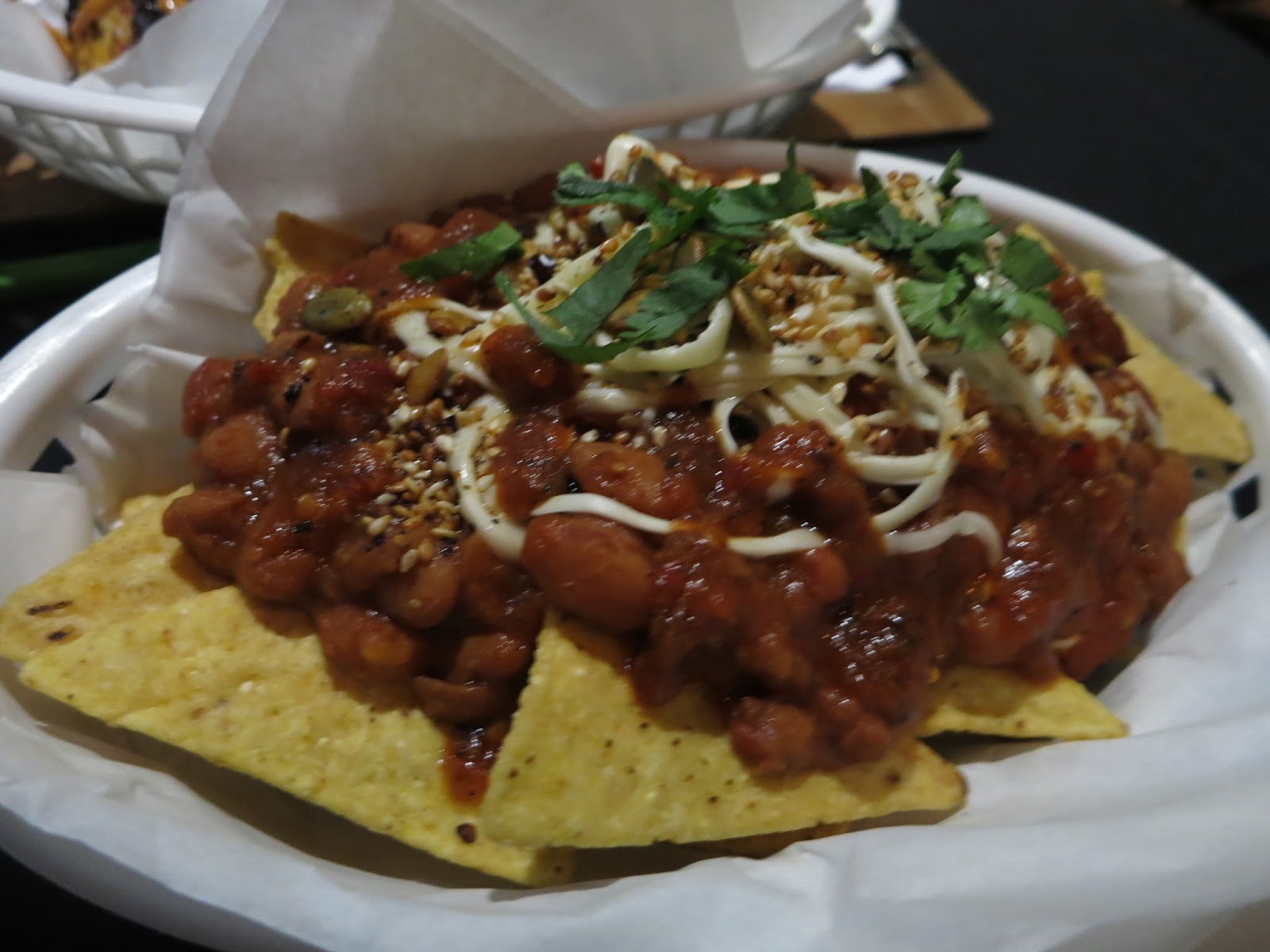 Would I return? One day, yes. Although the menu is limited, the food isn't bad, and I really ought to sample their drinks.

I'd been nagging some of my friends to visit Kirribilli markets for the past 6 months, but due to the General Markets only being available once a month, we had difficulties making ourselves all available for a visit. We used the Ennis Road exit of Milsons Pt Station and followed the signs. Greeted by the dismal selection of stalls in the tunnel, we muttered, "What, is that all?".

Gladly there's actually a lot more to the markets than the below picture - and my favourite stalls were actually to be found in that tunnel! There was a stall with multi-coloured hand-painted ceramics at excellent prices, one with cute toddler-sized knits, and others with pretty summery frocks and $2 earrings. 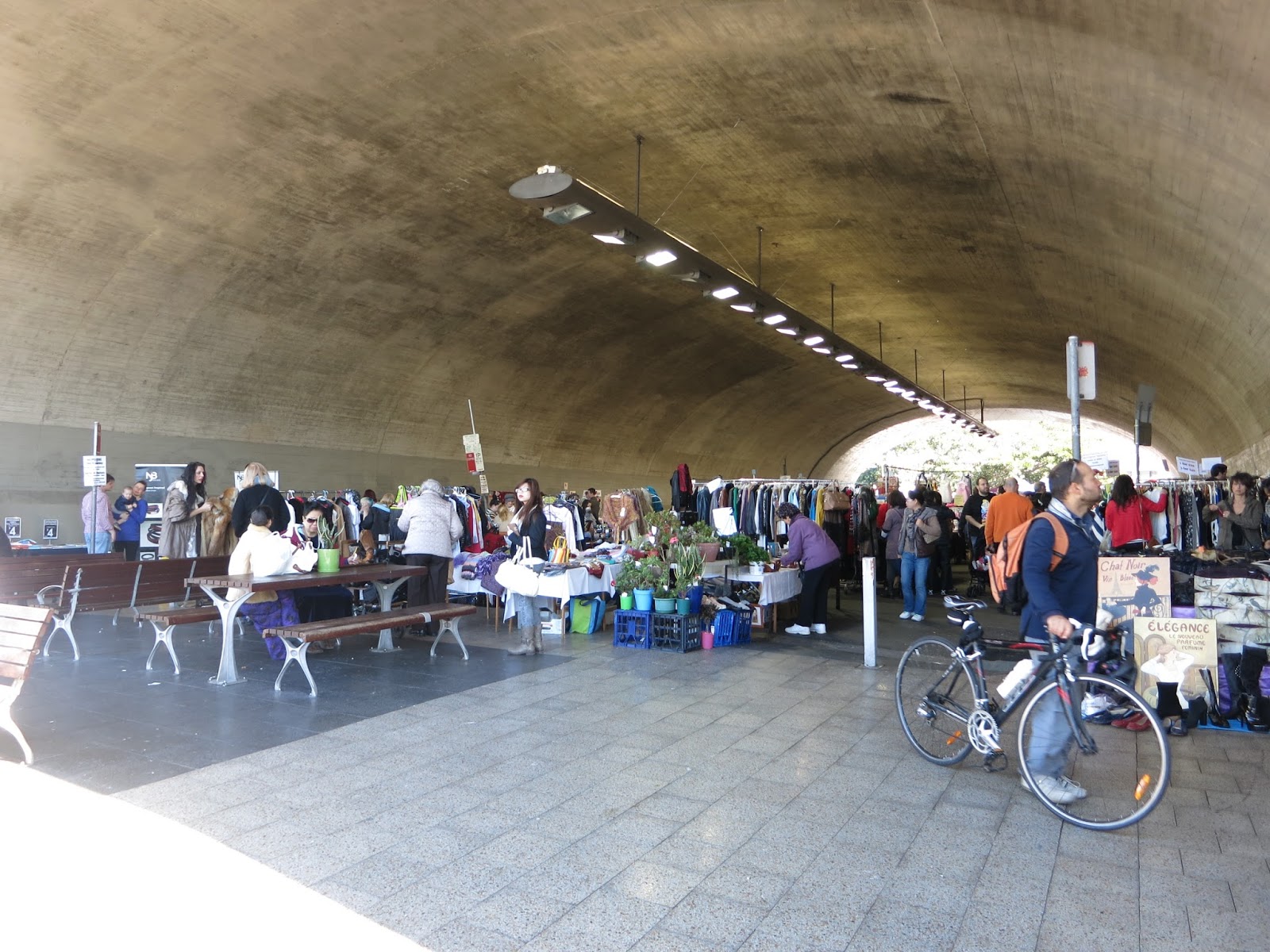 Beyond the tunnel lay a number of food stalls, which greeted us with an array of poffertjes, banh mi, chorizos, potatoes-on-a-stick and freshly-squeezed-lemonade. The crooning musicians and warm, sunny weather, made for a lazy Saturday of selecting pretty trinkets and rifling through racks of vintage clothes. There was one arm of the markets selling fresh produce, which added to the community vibe. 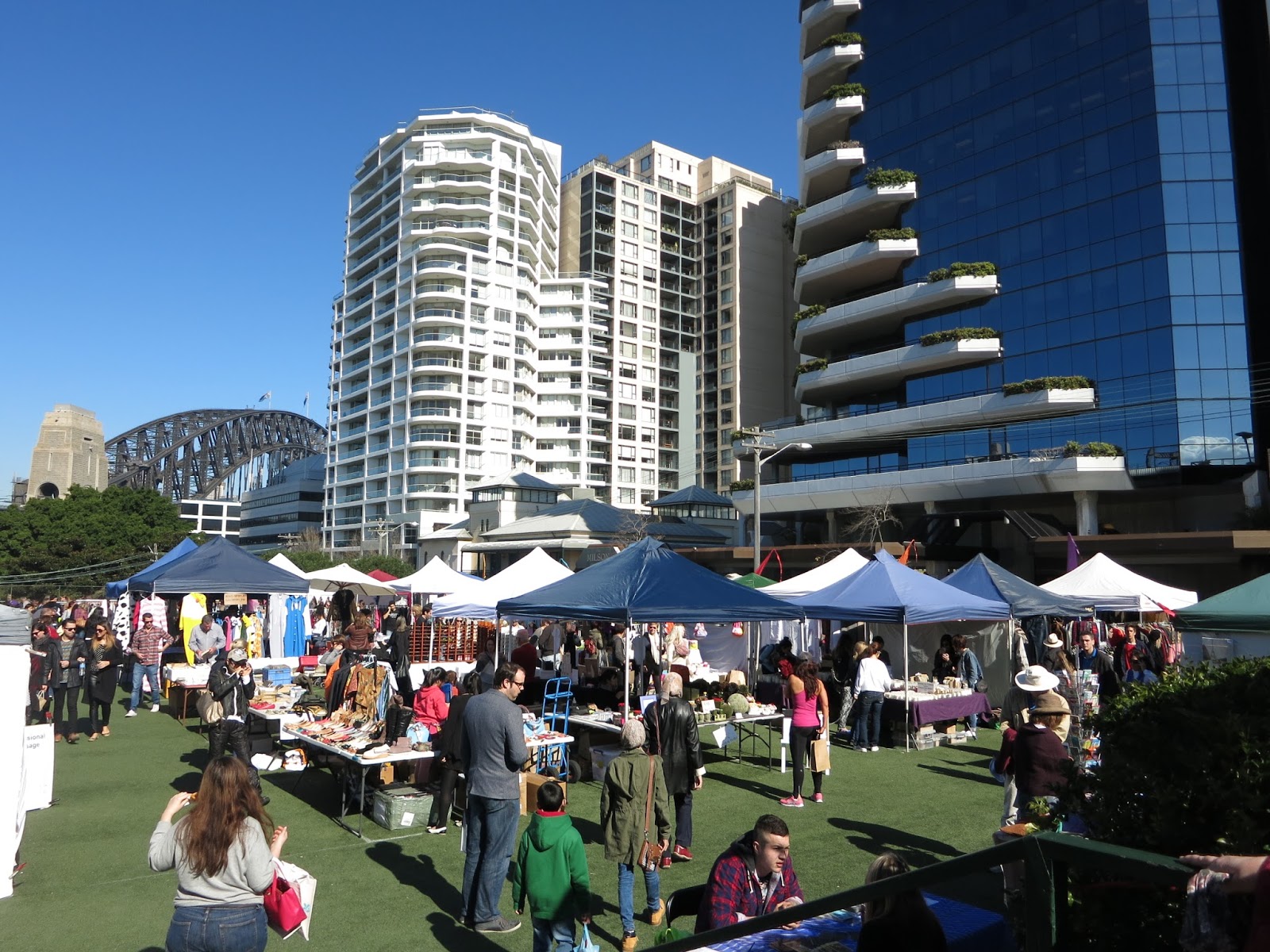 
The good ol' gaytime attracted me for its throwback to a favourite classic. Don't expect too much, and you'll be content enough with it. It was covered by a layer of tim tam and mixed with gaytime ice cream and crumbled cookie.

Once we tired of navigating the markets, we made our way to the water, where we sat and talked until the sun went down. 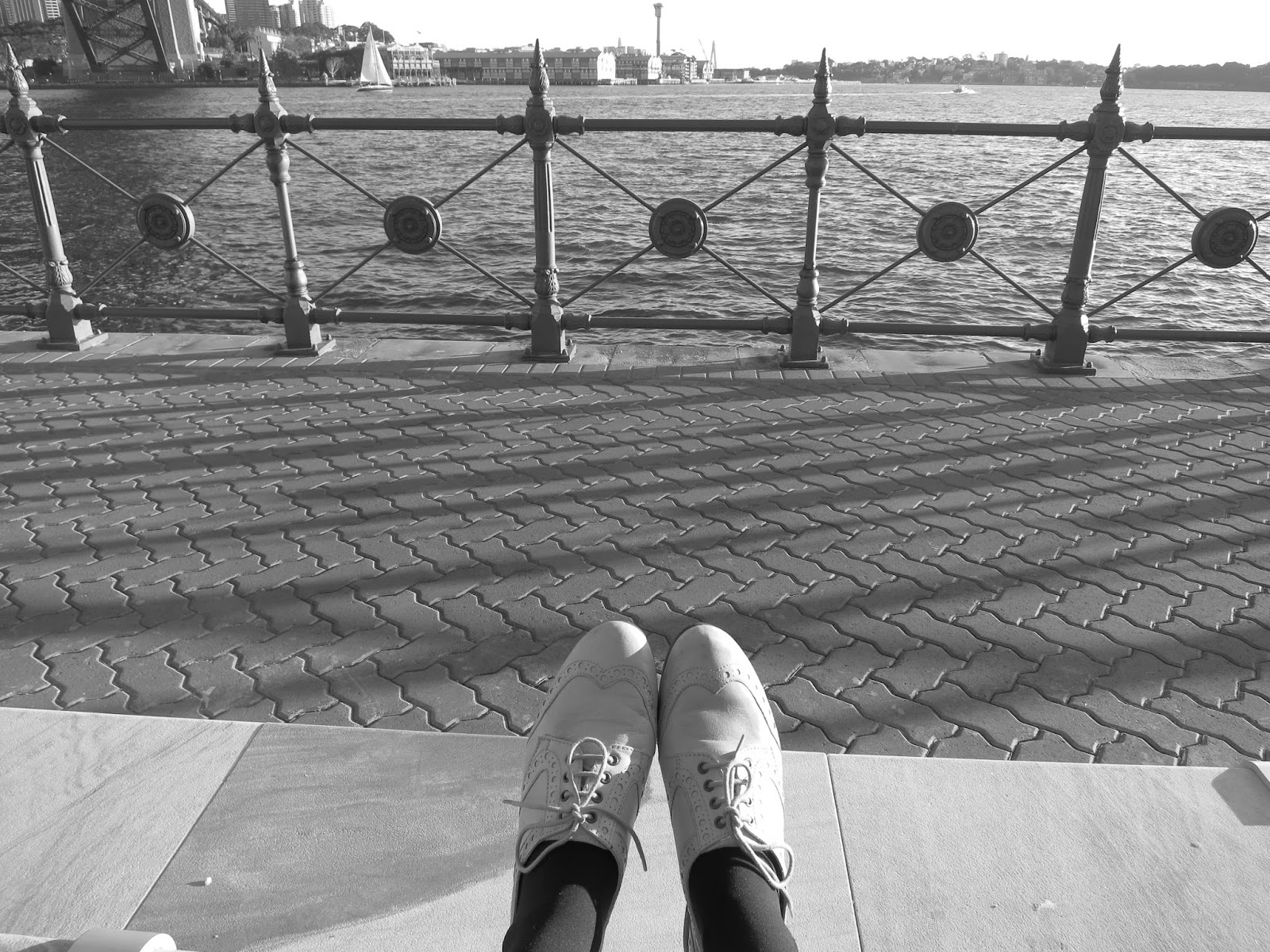 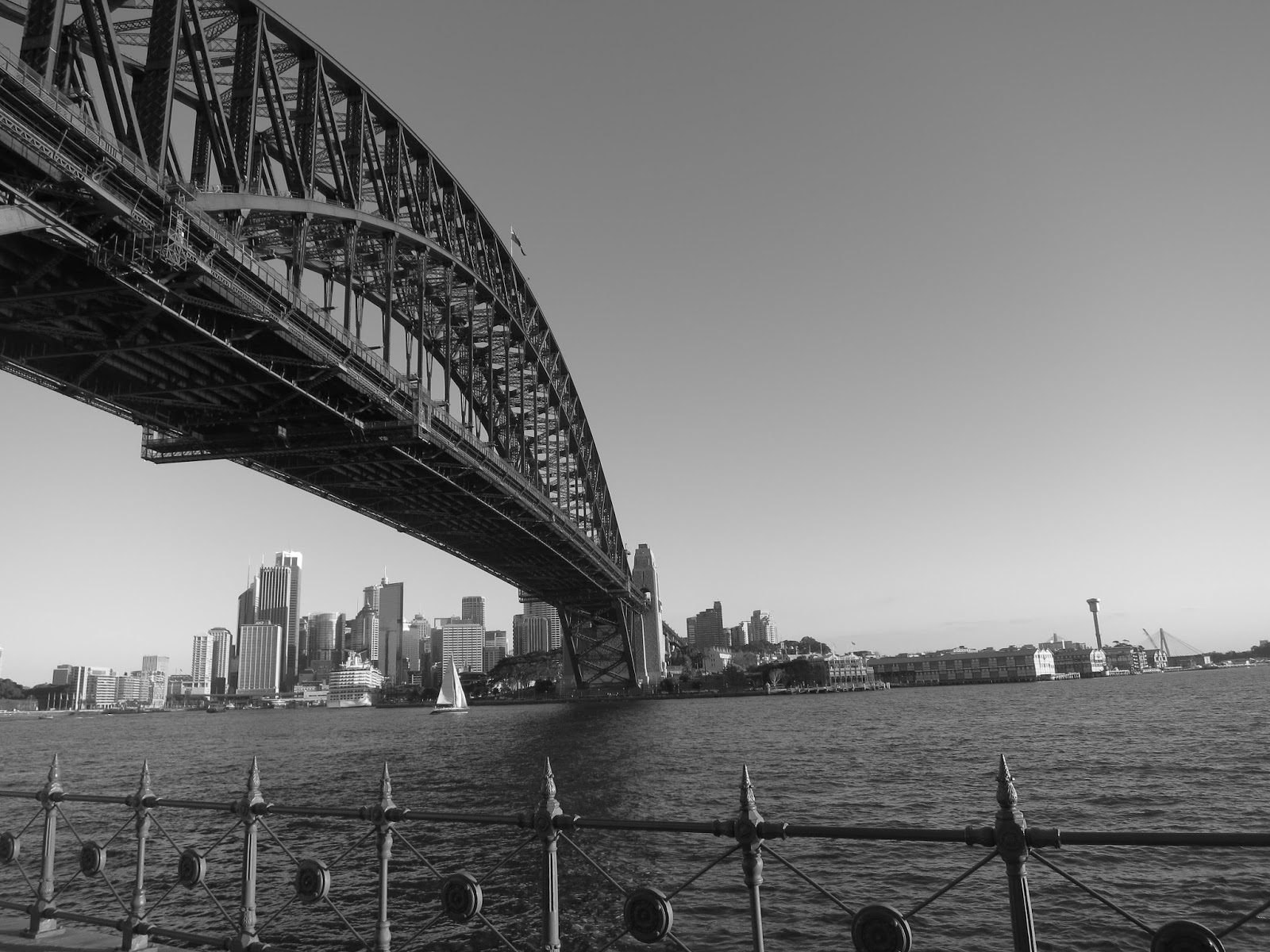 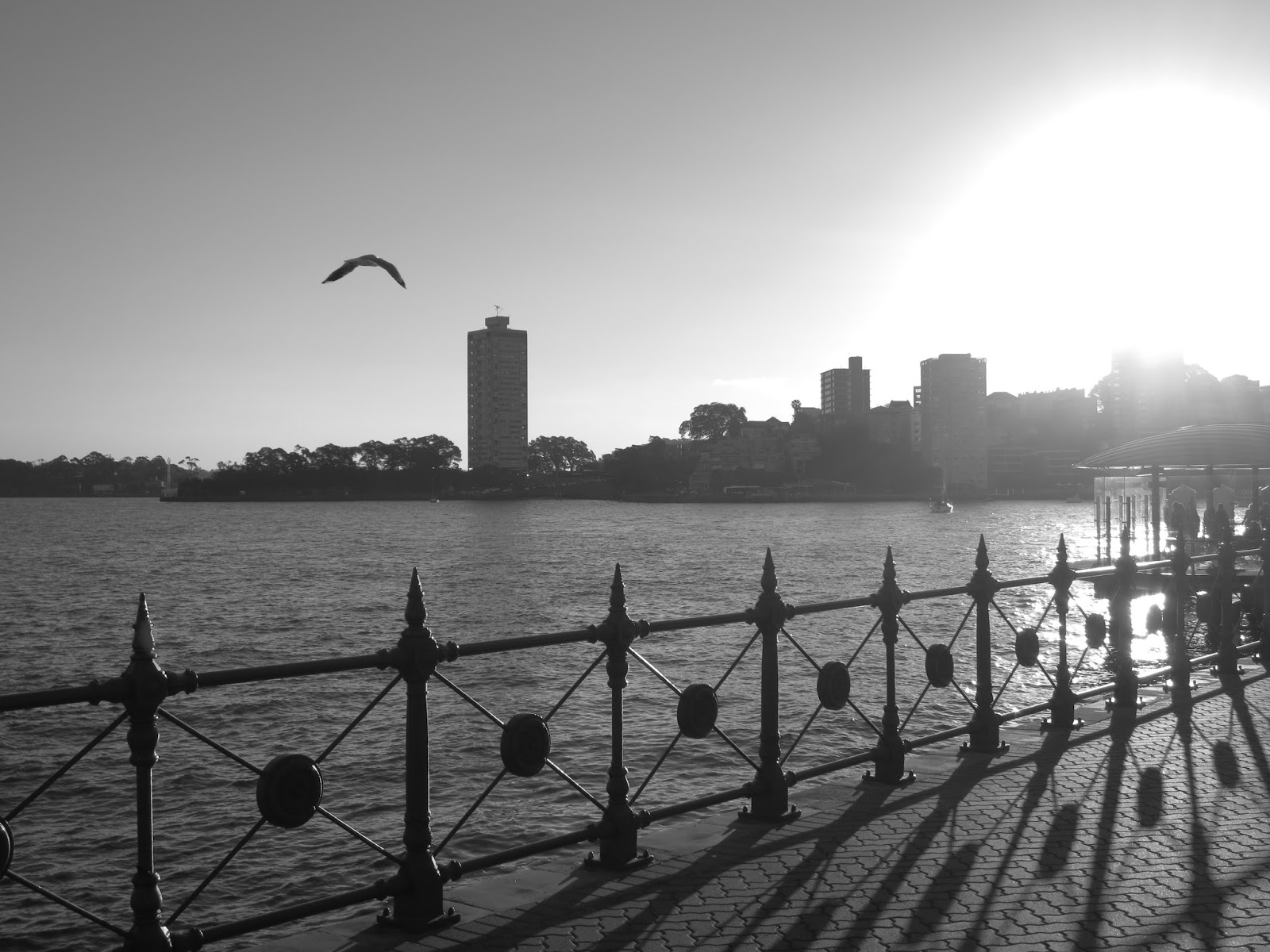