A couple of weeks ago, I and a bunch of high school buddies drove up to the Hunter for a couple of nights. Having heard that dinner is particularly expensive there, we decided to make use of the produce in the area and to assemble meat and cheese platters in the evenings.

Lunch: We drove up on a Friday and arrived in the early afternoon, dropped our stuff off at the villa we rented, then headed out for a late lunch at Bluetongue Brewery Cafe (Cnr Hermitage Road & Mistletoe Lane, Pokolbin NSW 2320).

One of my companions ordered a beer paddle that showcases 6 of the Bluetongue beers, complete with an A4 sheet sharing tasting notes. Not a big fan of beer, so the only thing I tried was the alcoholic ginger ale. Very light, great if you're trying to get into beer. If you take the paddle back up to the bar, they give you a standard glass of beer.

I had the lamb gnocchi because I was starving. It was alright - heavily tomato based, and the gnocchi seemed a little mushy - it disintegrated into the sauce. Meat was tender. 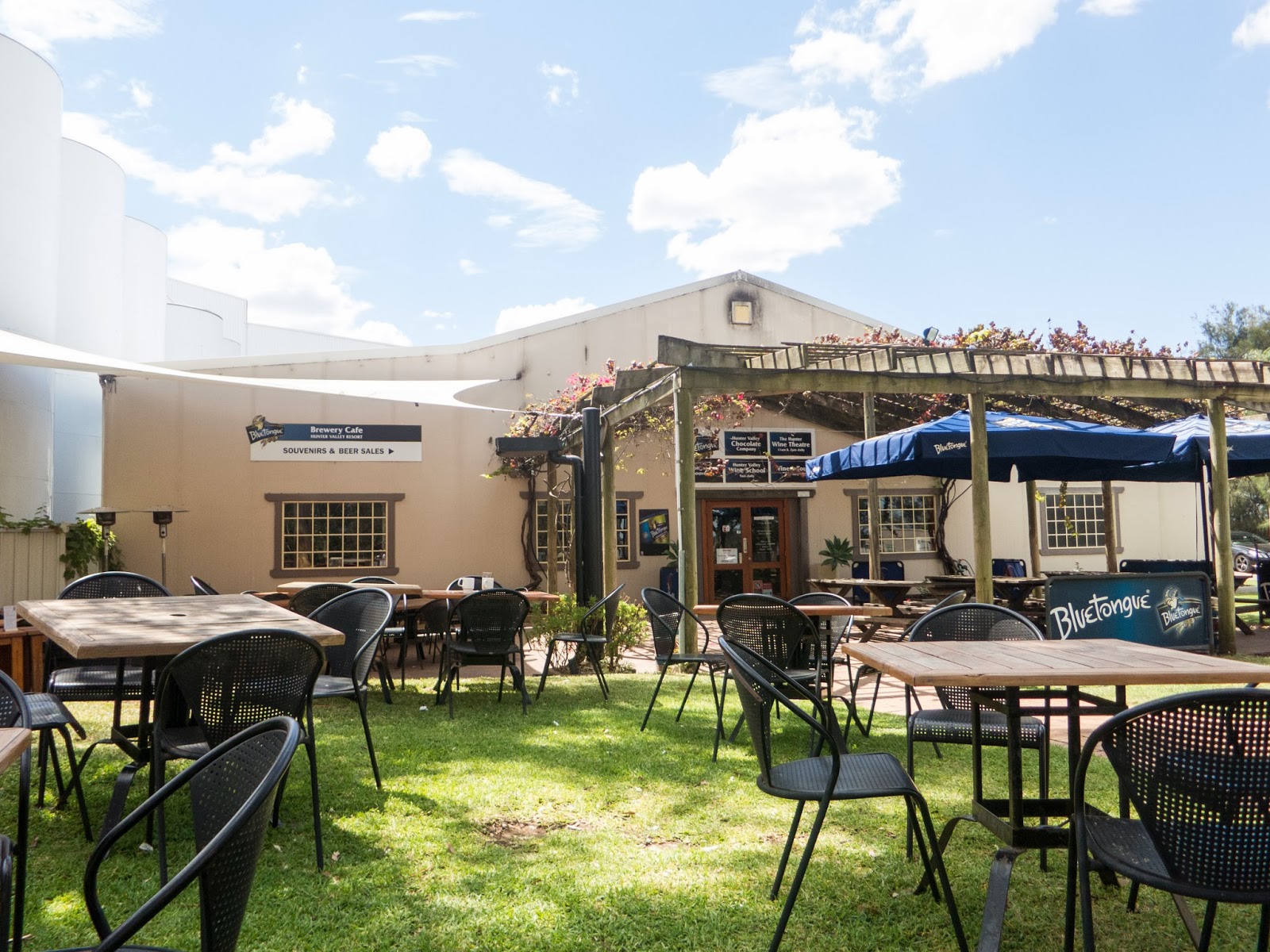 Post-lunch: A cheese shop, our first taste of wine in Pokolbin, hitting up the general store, and frolicking around the villa 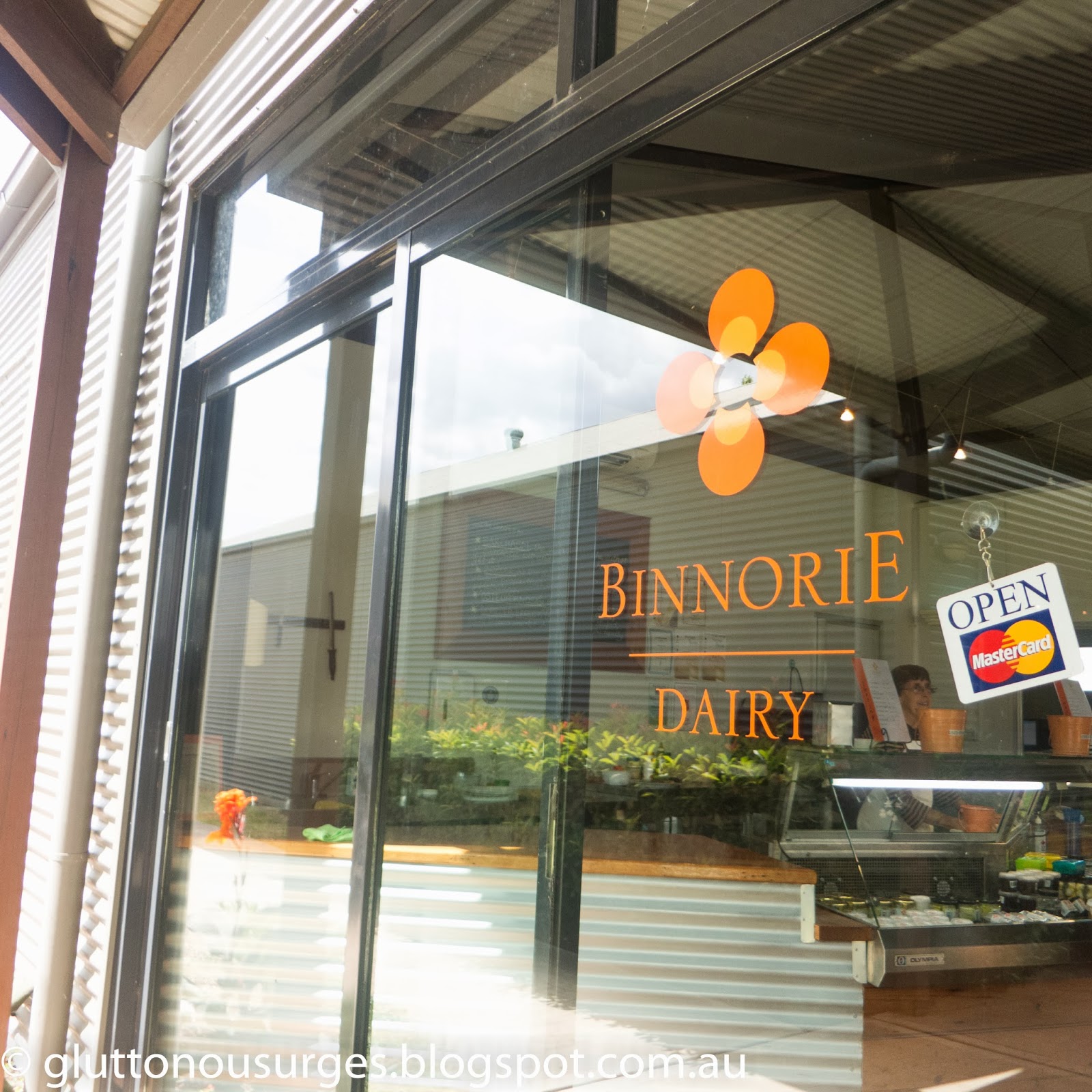 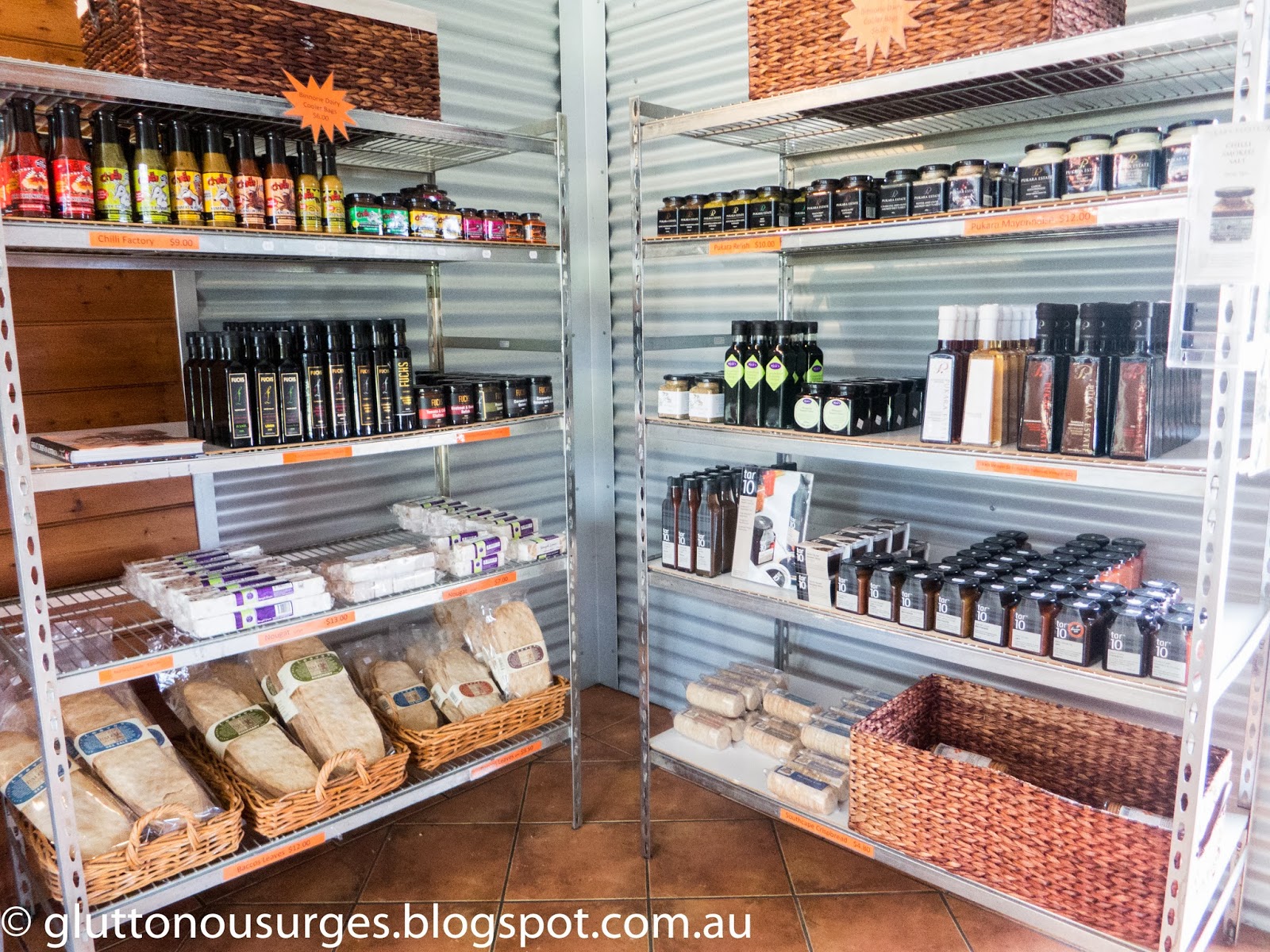 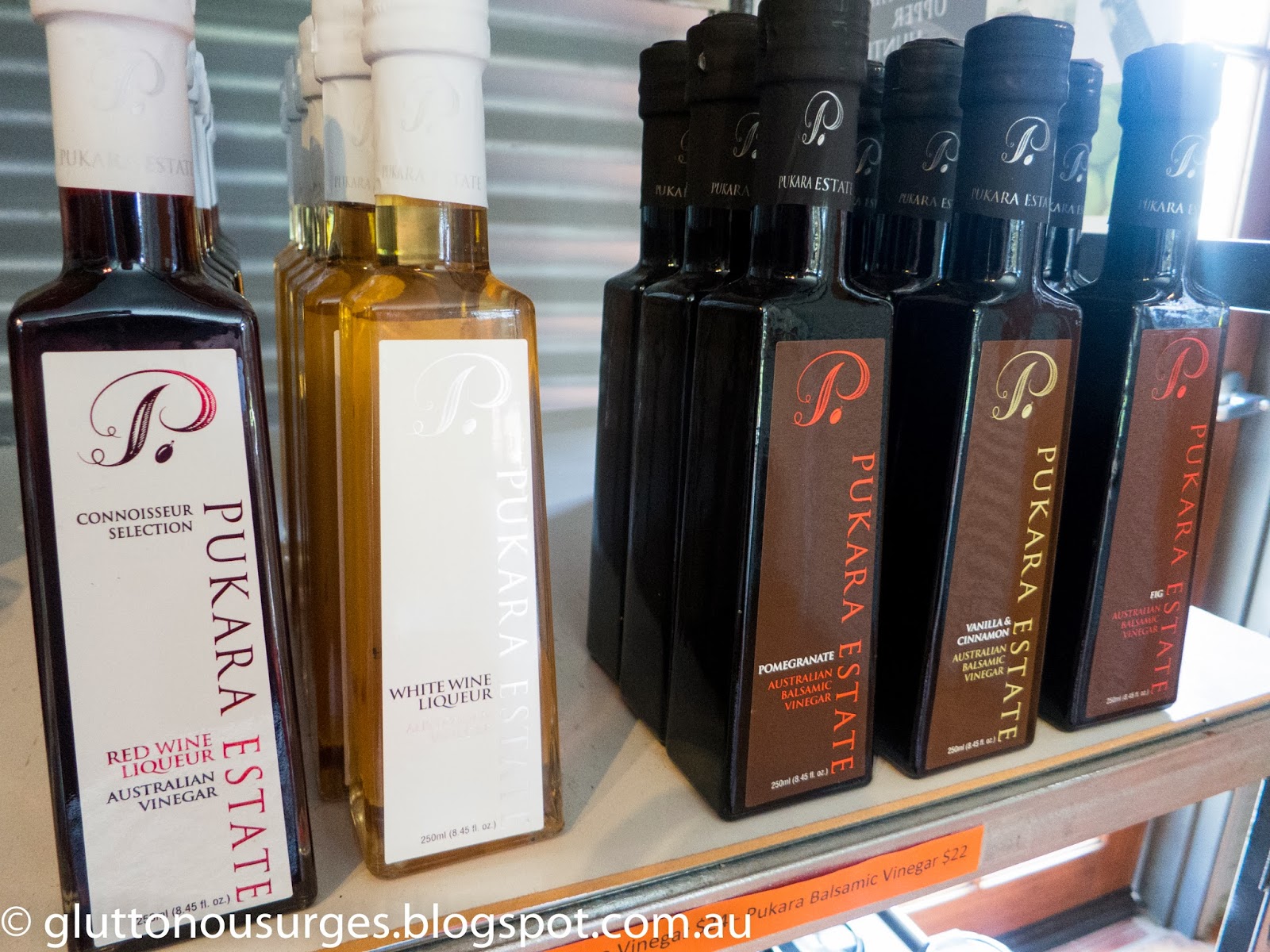 Pokolbin Village has your basics - a general store, one of the Smelly Cheese Shops, a chocolate shop, a couple of cafes and a couple of retail stores. Smelly's was great for gathering ingredients for our platter, and that Morpeth bread is so soft and dense. For those in a huge rush, they even have ready assembled platters.


Hunter Distillery: (1686 Broke Rd, Pokolbin NSW 2320)
Unlike its competitors, Hunter Distillery focuses on spirits. They have gin that they liken to Hendrick's and Tanqueray No 10, a number of liqueurs, and a formidable range of flavoured vodka. Had a lot of fun with the test tube shots! CC our resident alcoholic had 6 (the max being 8), while the rest of us had 3 - 4.

Picked up a couple of jams from the Hunter Valley Chocolate Company, popped into the British Lolly Shop, stopped off for a quick bite. We were looking for Bliss Coffee, but they've closed down and have since been replaced by a random cafe.

As you can see, they didn't have good coffee - very watery and milky. Their pies were pretty good for the price. It didn't taste plastic, and was a decent portion.

Went to two wine rooms. The people at the first were really friendly. Served by a pretentious and somewhat cantankerous old man at the second.

Good gelato in Smelly Cheese Shop. Have been told that the Thai at Oishii is good, but didn't get to try. Returned later in the evening to pick up bread, cheese and cured meat for dinner. 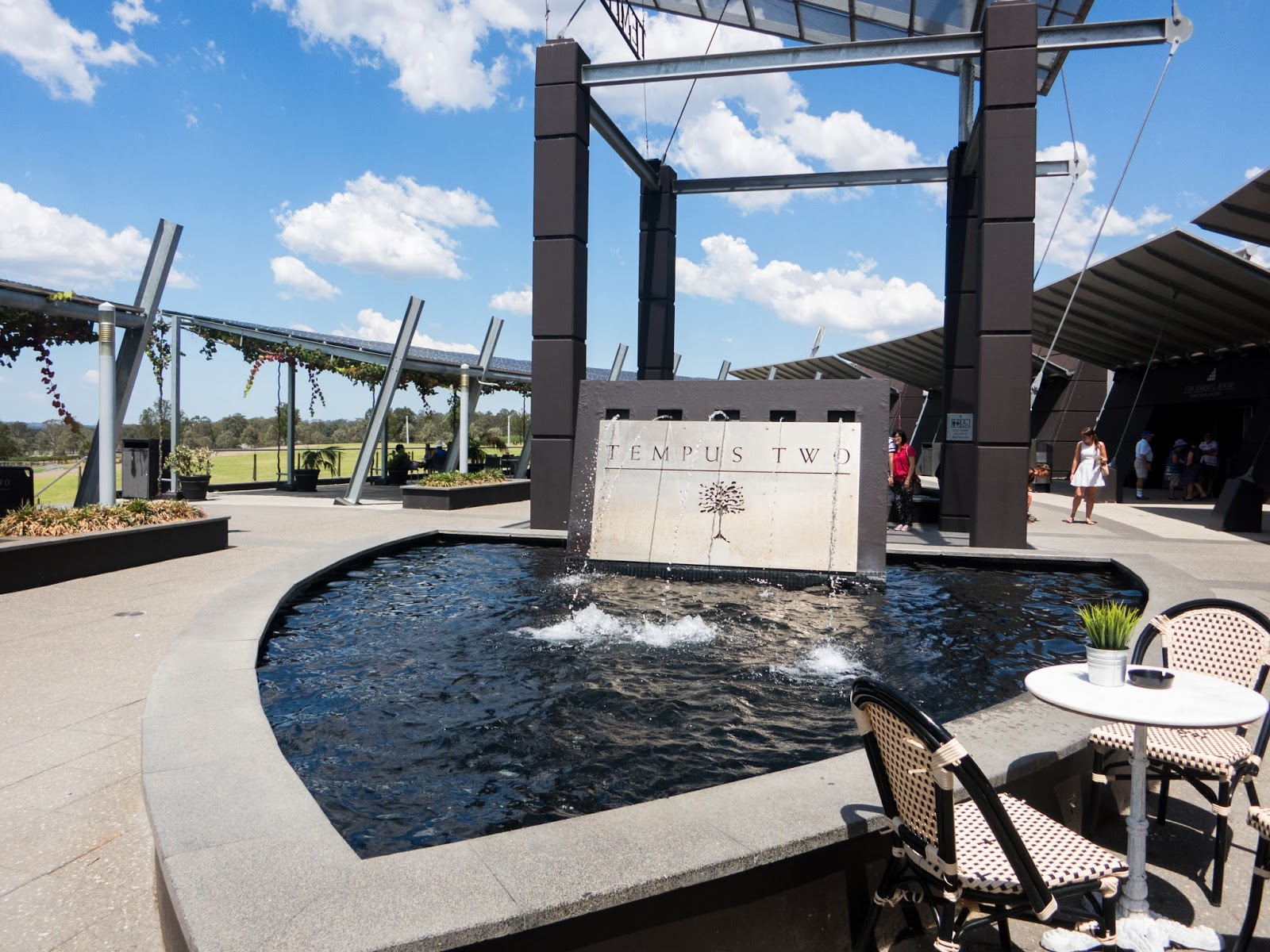 We spent about an hour here altogether. There were no other visitors so it felt like we had the whole place to ourselves! The staff member who showed us around was friendly. We were told that they're one of the few wineries in the Hunter that grow Alicante Bouschet grapes.

I discovered I much prefer sit-down tastings rather than standing at the counter feeling pressured to hurry up and buy something. Our group bought a dozen bottles and received a further two on the house. Loved the Verdelho and dessert wines.

Margan:
Vineyard with a restaurant. Picked it out from the 2011 edition of Gourmet Traveller. Good (and very filling) breakfast, bought a dessert wine afterwards. Shall return for dinner one day.

Went to Pepper Tree before we set off for home. Good dessert wines.

Xin Jiang Hand Made Noodle is located above Hu's Inn and La Latina. This is also the shop lot that Hinode, the Japanese restaurant, used to occupy. The last time I was in the area, I spotted a steady stream of Chinese people heading up the stairs, so I figured it might be authentic.

It's not too different from the Chinese coffee shops around the area, such as Winsure BBQ Restaurant, except with even less emphasis on aesthetics...

I wanted to go for the noodles, but the Boy preferred the sound of fried rice, which he came to regret ordering. I quite enjoyed it, as bits of the rice were hard and chewy (see 2nd photo), like the crunchy bottom layer that's left over after you cook rice (in a rice cooker or a stone pot). However, it was these favoured bits that made the Boy wrinkle his nose in distaste - apparently he hates bibimbap too. No wonder he never orders any at Dukbaegi :/


The deep fried pork had lots of batter. Overall liked this dish, but the pork had chunks of chewy sinew and nerve. I picked the batter off of these and left the inedible parts on my plate in the reject pile.

The Boy had requested that this come with chilli, and I guess they forgot, because it came with none. While some chilli might have been nice, I was relieved it was left out after tasting the skewers.


The BBQ lamb skewers were a little tough and spicy as. The Boy was fine with them, but I could only have a couple of bites before my lips felt like they were on fire. Also, despite our best efforts, we couldn't dislodge the meat with our chopsticks. In any case, once I surrendered all the skewers to the Boy, he adopted the "manly" method and ate them right off the skewers.


I'd come back to try the hand made noodles, and the menu is really extensive. The food is pretty cheap and the portions would be great for groups, but I haven't had the greatest luck with their meat.

Hu's Inn has been around for quite a few months already. Every time we've walked past, its punny name would beckon like a siren to a boat of sailors. We eventually paid a visit when the Boy decided to side with millions in the New Year's battle against fat: 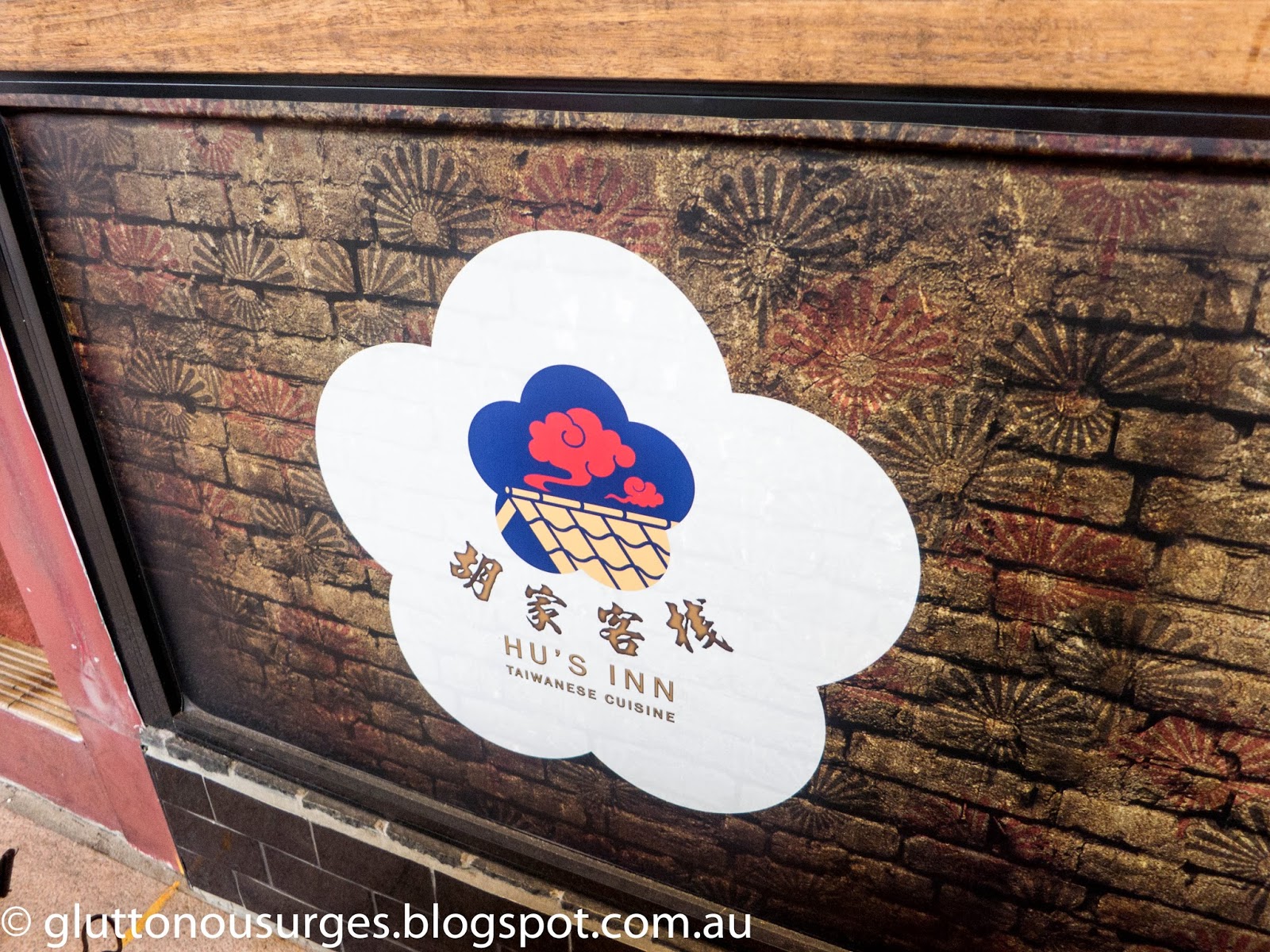 The group of shop lots that Hu's Inn now inhabits has housed a vast range of businesses, including a branch of Subway, a clothing shop, and the French cafe Le Petit Paris. Though I'm sad Le Petit Paris moved to Mosman before I managed to pay it a visit, it's great to see Chatswood now has two Taiwanese eateries (the other being Bao Dao). It'll certainly add variety to the "Chatswong/wu" stereotype. (Well, not really. It's still Asian. Whatever the case, it's not Thai/ Japanese/ Korean/ Cantonese/ Shanghainese. IT CAN ONLY BE A GOOD THING!!)

Ordering system is similar to Bao Dao and is as follows:
1. Be seated
2. Order and pay at the counter
3. Return to table and wait for food
4. Food comes to you

Condiments include pickled chilli and their specialty chilli oil - reported by the Boy to be pretty hot.

Cuttlefish ball soup and iced green/ black tea are half price when you order a main. I forget the prices but each were only a couple of dollars.


The traditional Taiwanese braised pork rice was pretty decent but probably wasn't good for the Boy's diet - the minced pork was slathered in liquid fat, reminding me of pork belly in gua bao. Although the meat was only laid out on top, the sauce had trickled through the rest of the rice, which is really all that matters.


Wonton noodle soup was the other main we ordered. Portions were large considering we'd ordered  small dishes from the "Fried Delights" half of the menu as well, but would be what you'd expect from a casual Chinese restaurant. I'm always a sucker for clear broth, so where I have to prioritise my food, I'll go for the soup first. The wonton pastry and noodles were firmer than I'm used to getting in Cantonese restaurants - I'm not sure if this is typical of Taiwanese food in general...


I avoided the offals and opted for the less adventurous "fried delights". The cuttlefish balls and American hot dog were sprinkled with a LOT of salt and pepper, making it difficult to taste anything else. While it looks pretty, it's probably better to serve it on the side (or to avoid it all together since condiments are displayed on each table).

Aside from the pepper, the cuttlefish balls and sausage were pretty standard stuff.

We had no idea what tian bu la is, but once I sank my teeth into one piece, I was relieved that it isn't a dish of organs. It's pretty much like the fried fish paste that my family eats at home with our laksa.


I also had my first taste of American corndog, which was the sausage from the American hotdog coated in a thin layer of cornmeal batter. Sorry America, I don't think I'm a fan.


Service is friendly, though a little difficult to communicate with in English - kudos to the Boy for speaking for me in Mando.

There's one thing that's been bothering me, though... Hu's Keith?? 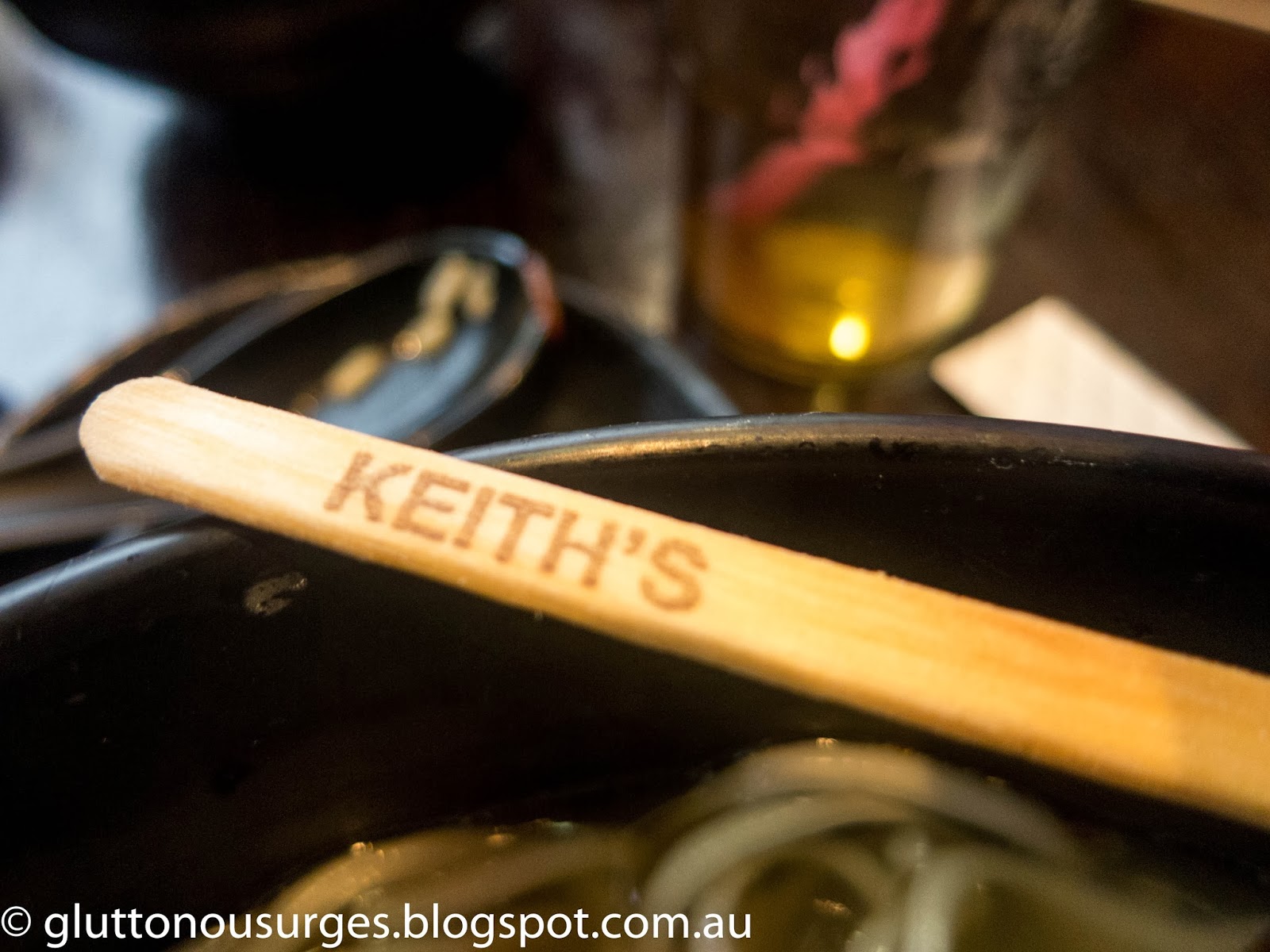