A few weeks ago, I finally took up one of Spidey's suggestions and dropped into Thanon Khaosan (the place with the tuk tuk and takeaway desserts). Thankfully it had a few free tables even though (because?) it was 7pm on a weeknight.

The wall of Thai number plates and hanging bird cages provided fodder for smalltalk while awaiting the arrival of our food. 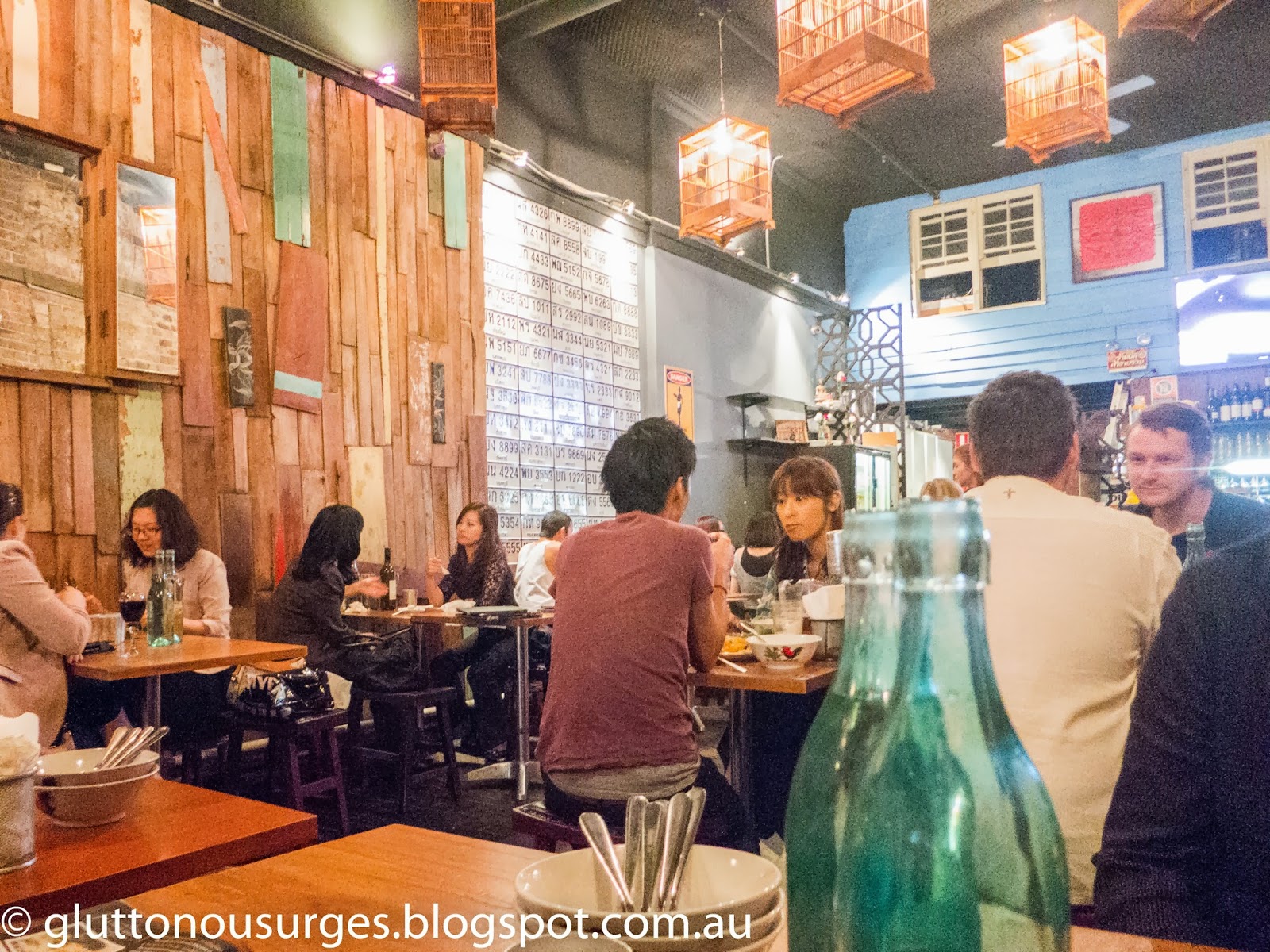 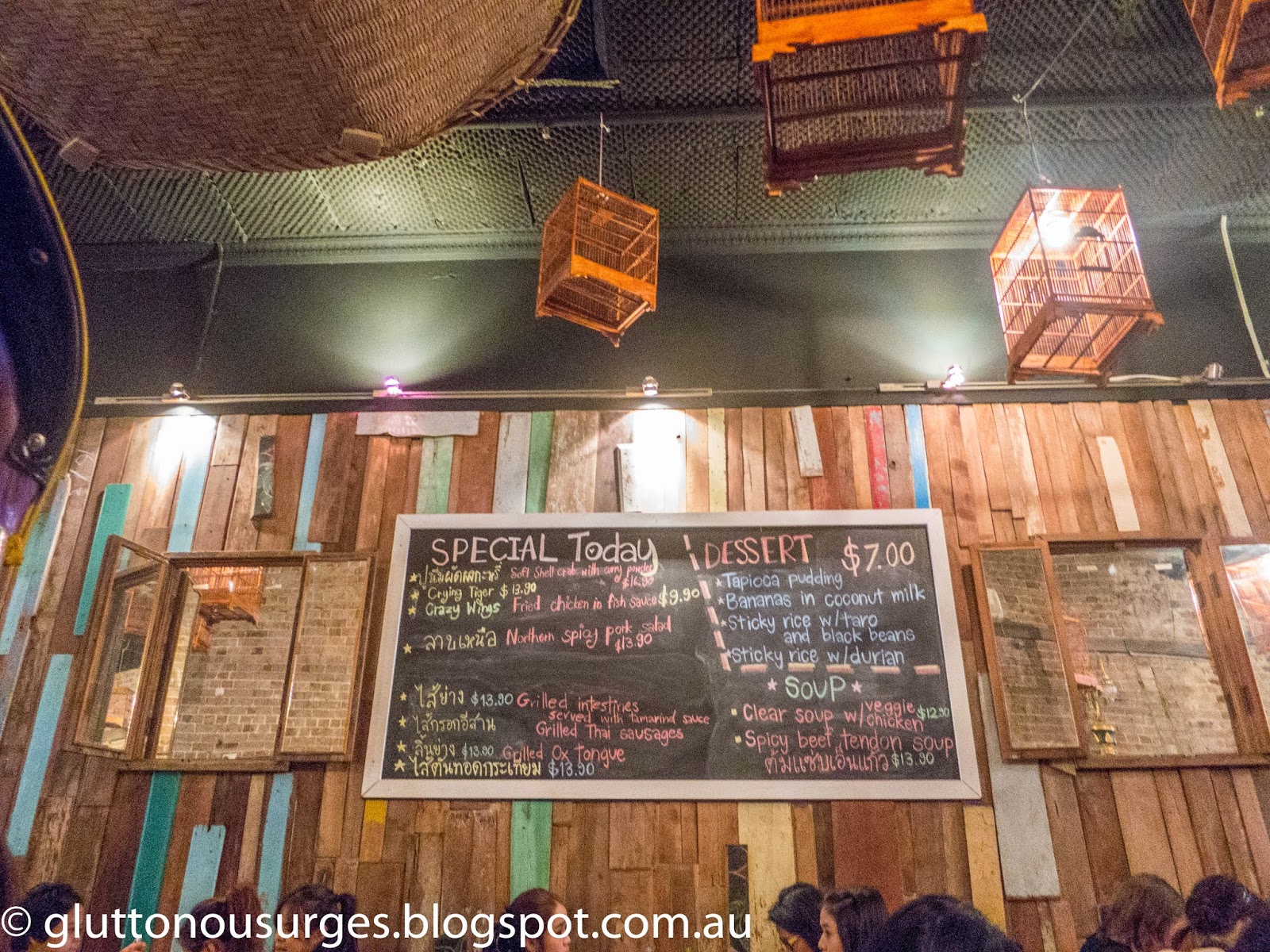 For our entree, we had the tod man goong (prawn cakes). I commenced eating immediately, while the Boy considered them to be foreign objects and suspiciously prodded one. Fried and chewy, they were like an oilier version of the Chinese fish cakes that we normally have with noodles. The light plum sauce added a welcome sweetness. Unfortunately, they were a tad dense and soggy, lacking the crispiness that I'd so been looking forward to.


The red curry chicken was pretty standard - creamy and rich with bamboo shoots, broccoli and carrots. It was a little bit spicier than what you would find in the average Thai restaurant in Sydney.


The neah yang, or marinated BBQ beef with tamarind sauce, had a sweet yet smoky flavour. Most of the meat was tender enough, but 1 in 4 pieces were too nervy to eat.


The fried rice was pretty addicting. Possibly because of the bits of pork belly. And the chilli-basil that the rice was fried in. Basil is yum. Kind of oily, but it meant the rice was moist.


We asked if we could add the takeaway desserts to our bill, but were soundly rejected - we had to go to the front, select our desserts, and pay then and there. This was a small feat because I'm uncoordinated and can't juggle a wallet, money and plates :( 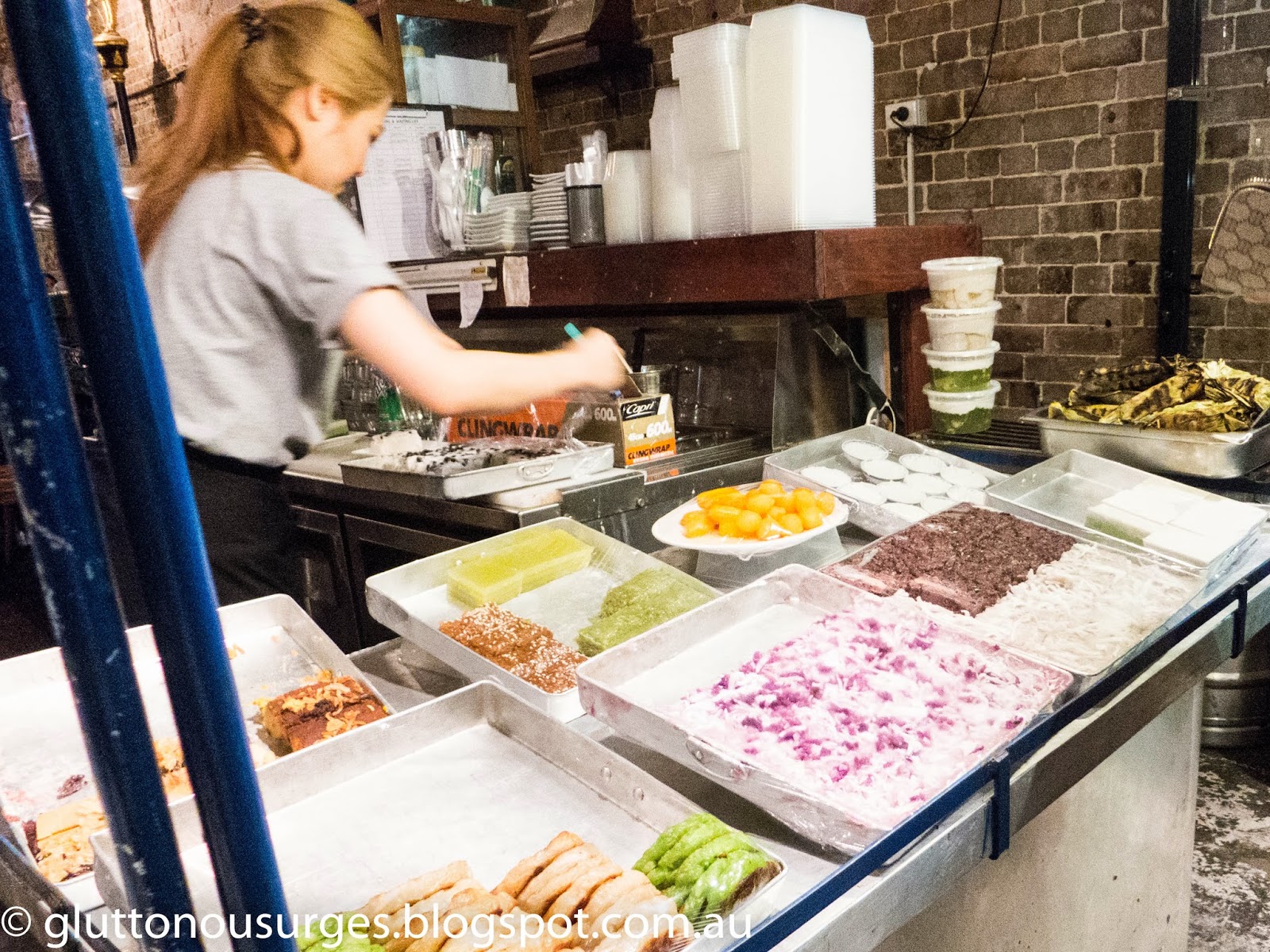 Desserts we had were as follows:
They reminded me of my mum's nyonya kueh. Though ever the loyal daughter, I still hold that her kueh is better :P The coconut cream components were by far the sweet parts of the desserts, while the layers that they were paired up with were more bland to balance off the sugar. The Boy's favourite was the coconut and sago, while mine was the coconut and red bean combination.

Overall, a satisfying meal, though probably not the best Thai I've had. 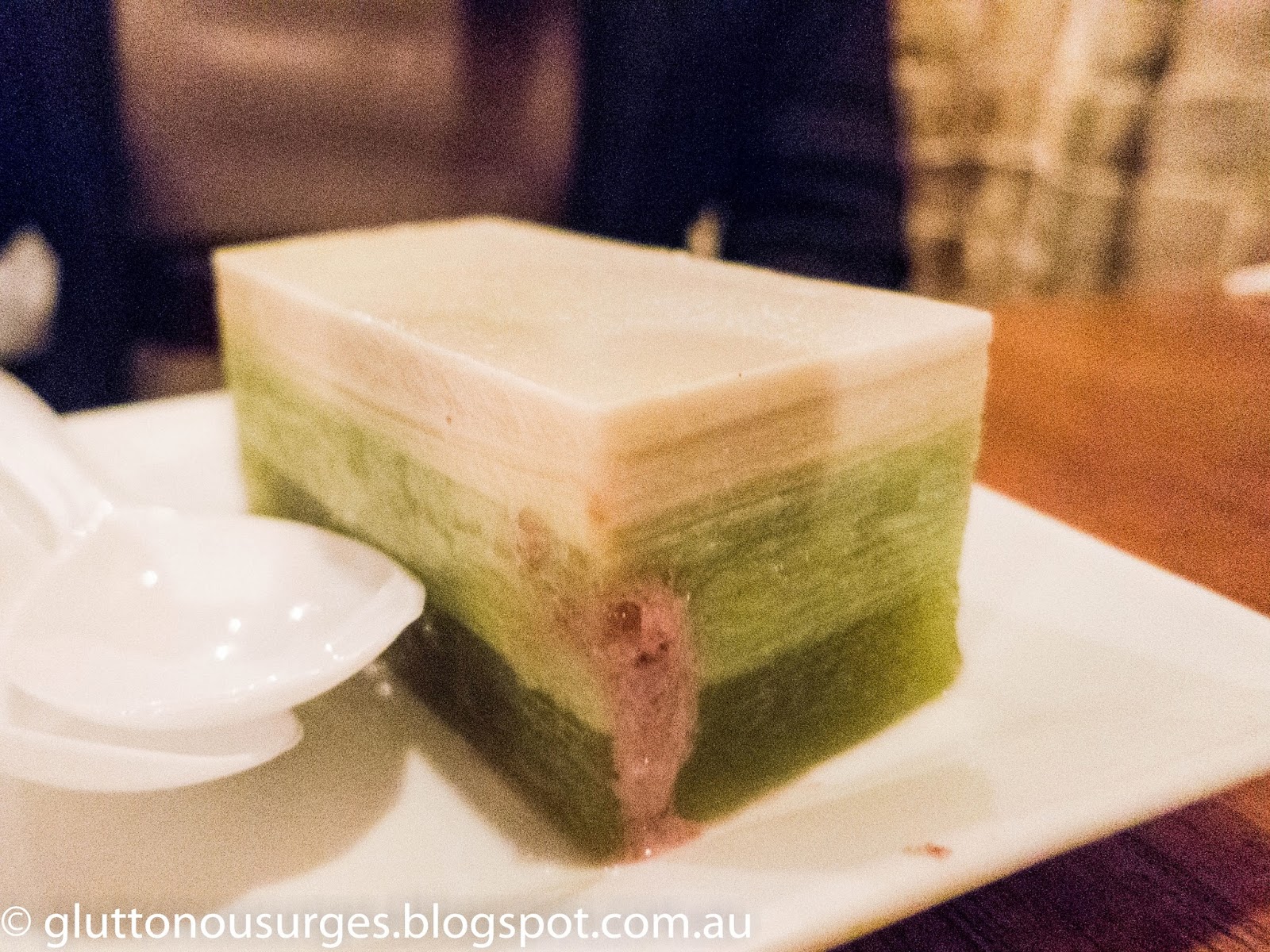 Dukbaegi is a new Korean restaurant right next door to Makanai (the former site of dessert cafe Zen Q). Its head chef, Danny Hwang, draws on his Korean heritage and influence of his mother's cooking to deliver an admirable range of stone pot dishes - including bibimbap, hot pot and noodles.

I've been here a couple of times already, and it's the Boy's new favourite Korean haunt in Chatswood. 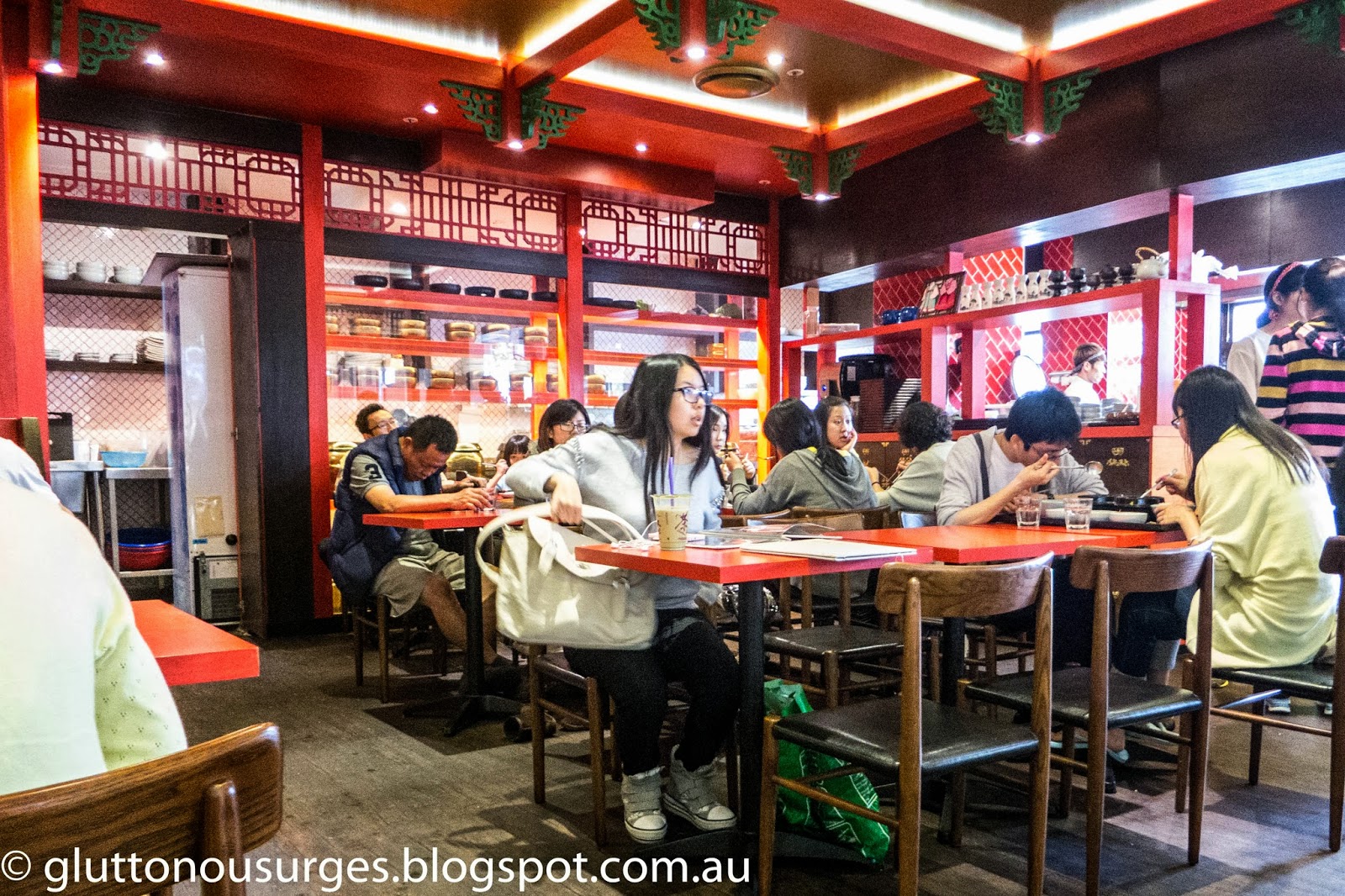 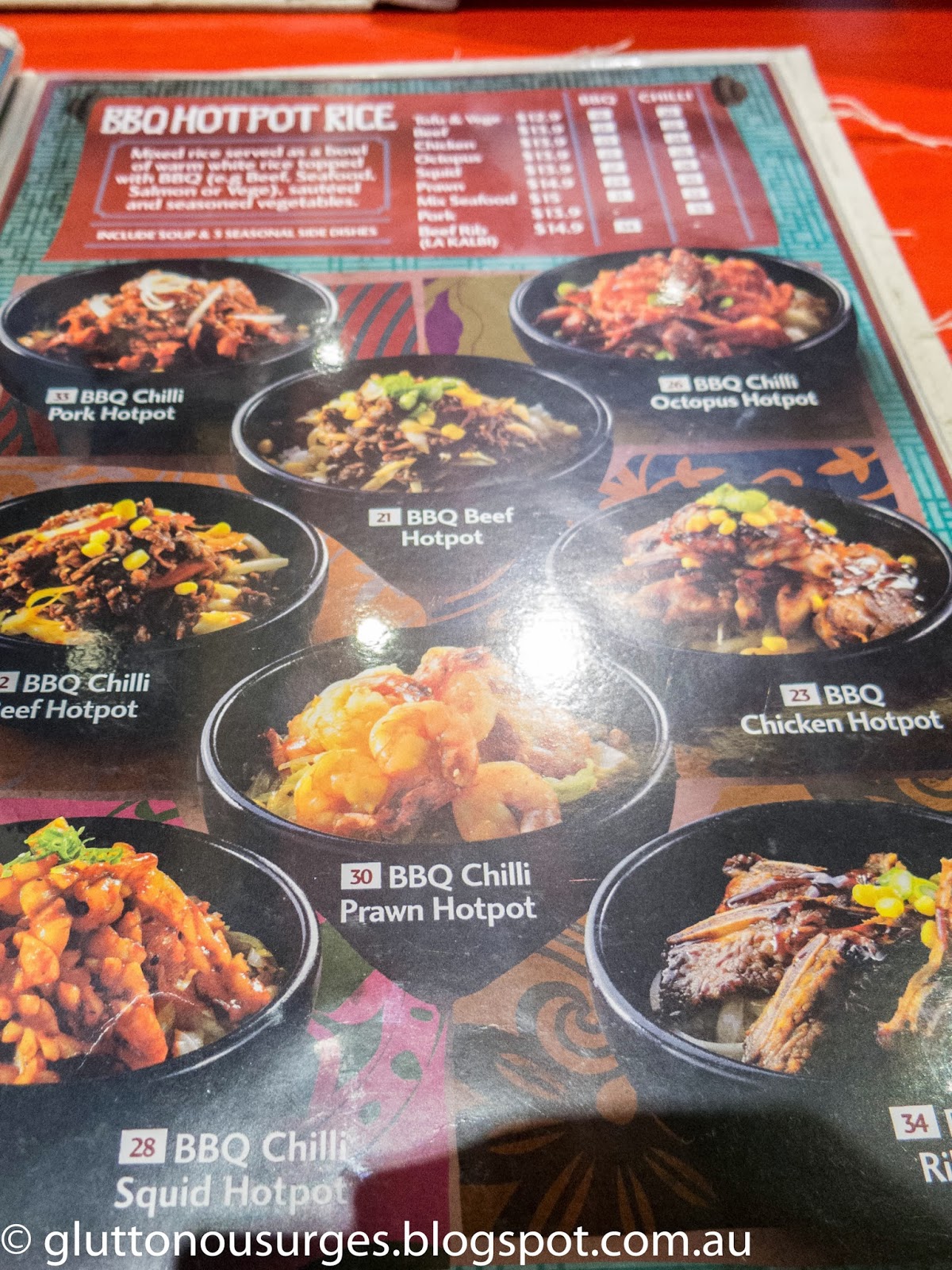 Turnover is high, causing the lines outside to shrink and grow reasonably quickly. We weren't sure whether we could have mandu (Korean dumplings) dine-in, or whether it was a takeaway option only (since the menu suggests that the former is the case). The waiter clarified that we could eat-in with mandu, so when given a choice between steamed and pan fried, we opted for the crunch of the latter.

I had a pork and kim chi mandu, while the Boy chose the chicken, both to be dipped in the soy sauce-based accompaniment. The kim chi in mine provided extra crunch, spice and moisture, but other than that, they weren't too different from each other.


My main was the BBQ beef bibimbap. Notably, this particular option didn't come with egg (though there are other dishes in the menu that do), and not all the vegetables were typically what you would find in Korean food (i.e. the corn kernels and slices of capsicum). I personally love these vegetables, so I was really pleased with what I had.

The 3 little side dishes were bean sprouts (which I offloaded to the Boy), spicy cold tofu and little bits of Korean pancake). 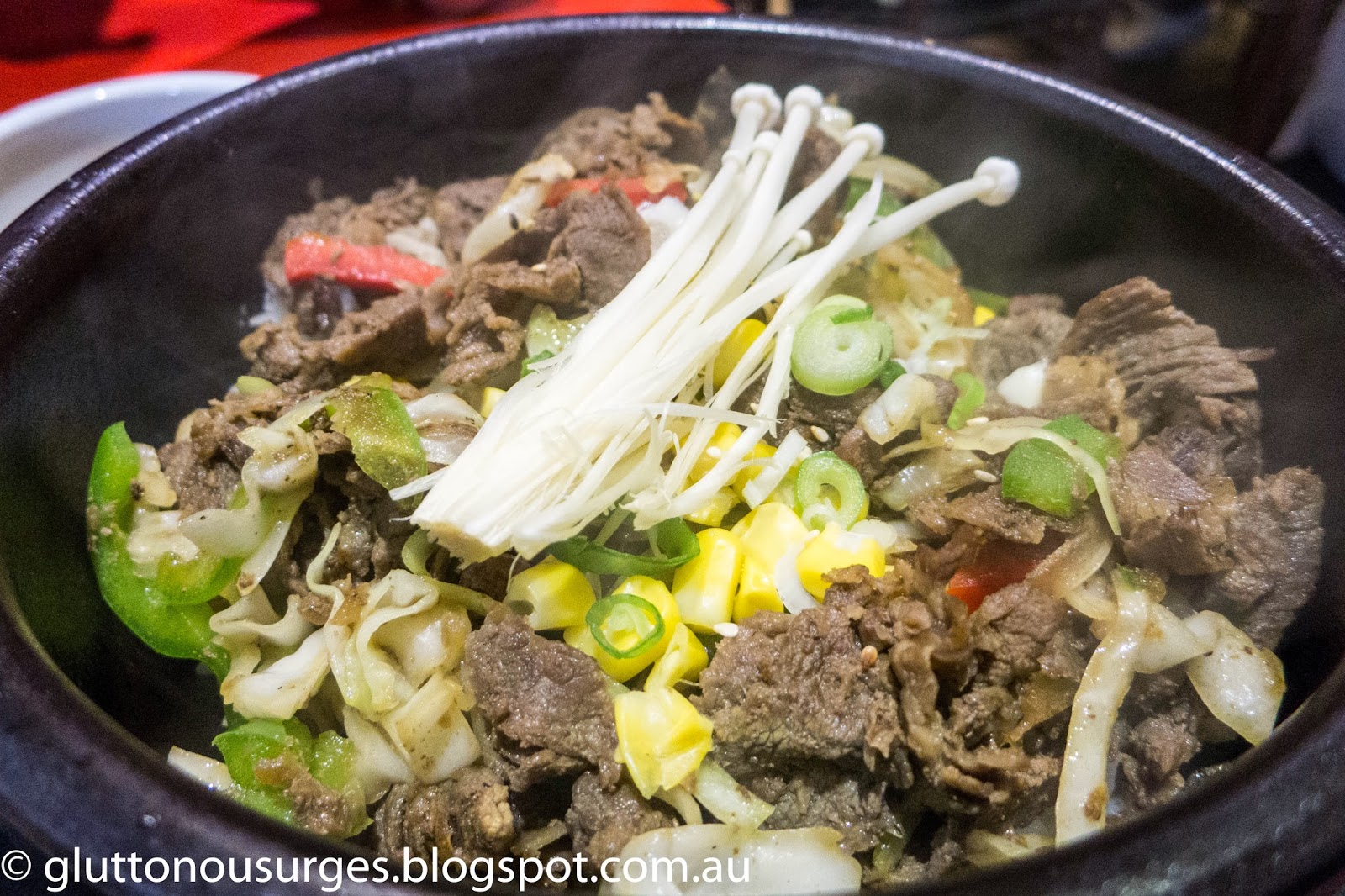 The first time the Boy ate the chilli prawn hotpot, it was excruciatingly spicy for me (and just tolerable for him). This time, they'd taken the spiciness down a notch, so it was hot but not overwhelmingly so. They're generous with the prawns, and the sauce is really tasty. It's made me believe that their rice dishes are pretty safe choices. 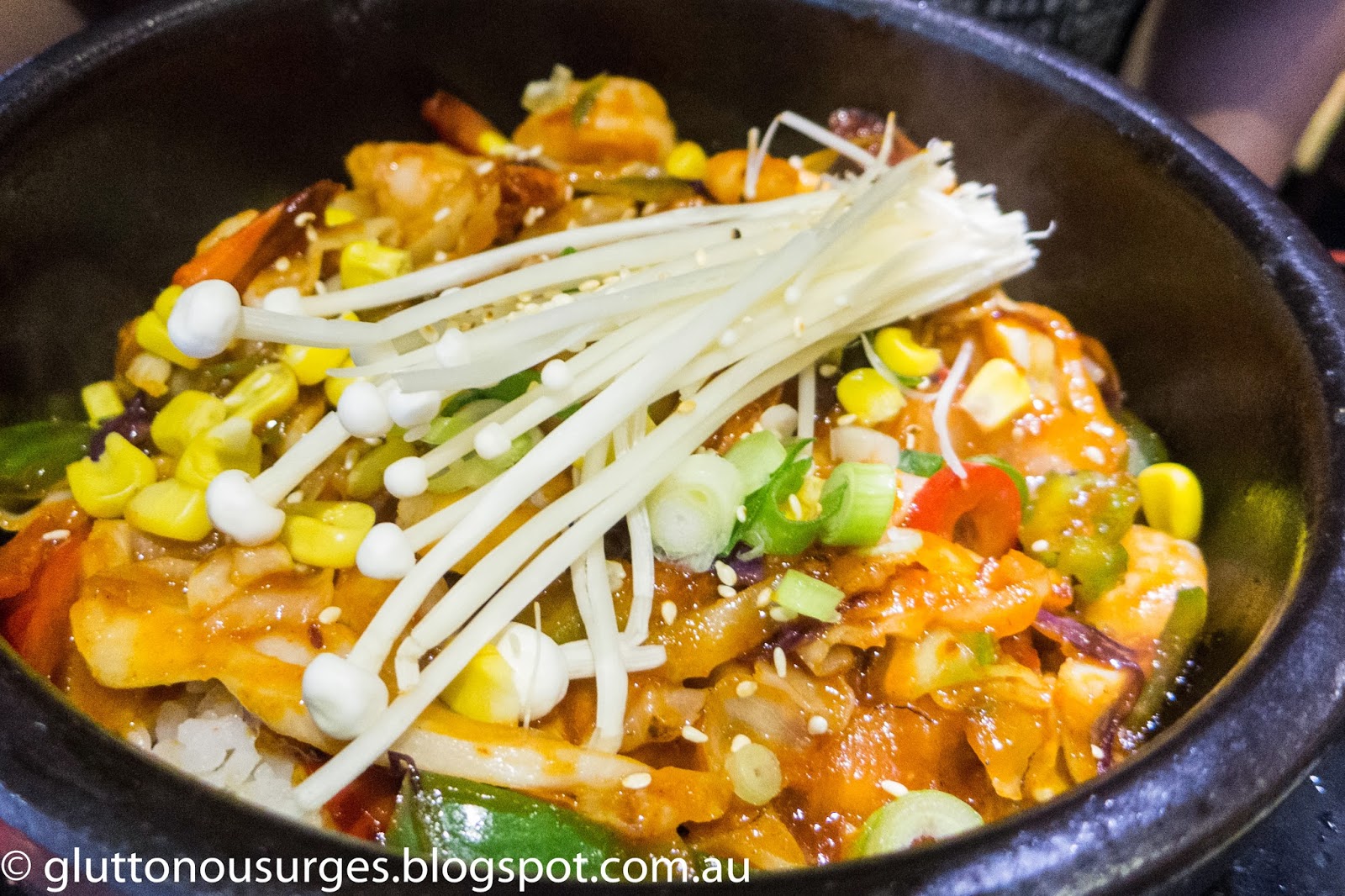 During my first visit, I'd ordered a spicy seafood noodle dish (can't remember the exact name), which was ultra hot. The Korean rice noodles had a lovely texture at times, but they also had a tendency to clump up together, creating hard, starchy and chewy lumps of noodle (which I know is a huge bother to a lot of people).

I'm keen to see how its newly-opened udon neighbour fares.
Posted by Unknown at 00:14 No comments:

My friend Shell and I met up for a long overdue catch-up recently. Out of the many cafes in Surry Hills, we determined that the Rustic Pearl was a good place as any to brunch at, selecting it for its uniquely Turkish/ Mediterranean flair. 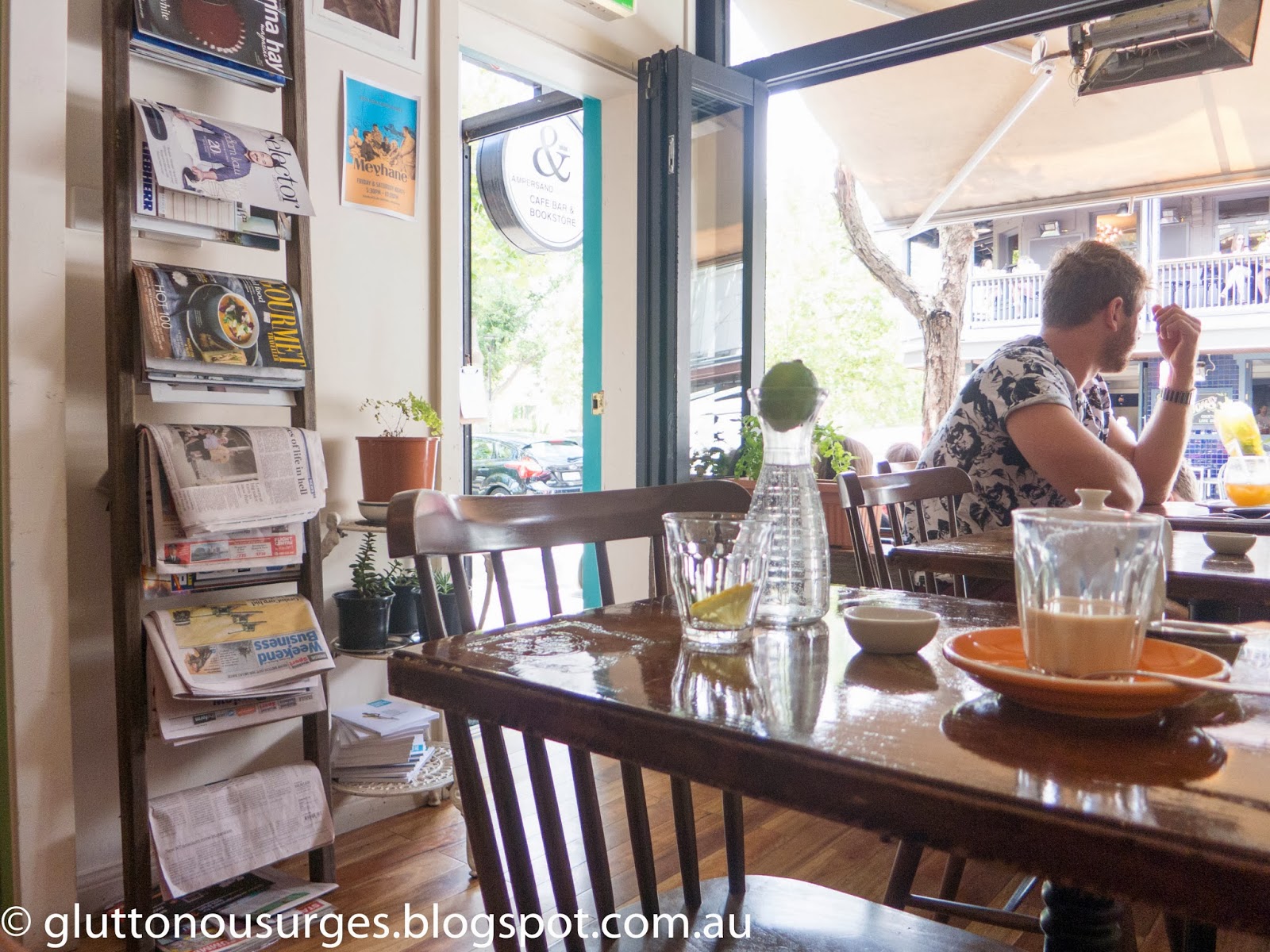 Living up to its name, the Rustic Pearl is decorated with quaint trinkets and a charming mural (below).

Admittedly, I've always been disconcerted by nazar, or evil eye amulets. There was a Turkish pop-up store a few months ago in Chatswood Westfield which sold wind chimes, beautifully painted bowls and other ornaments bearing depictions of the eye. It feels silly to admit it, but it felt like they were all glaring intently at me - ironic because culturally, nazar are used to ward off bad luck from any "evil eyes" directed at a particular person. 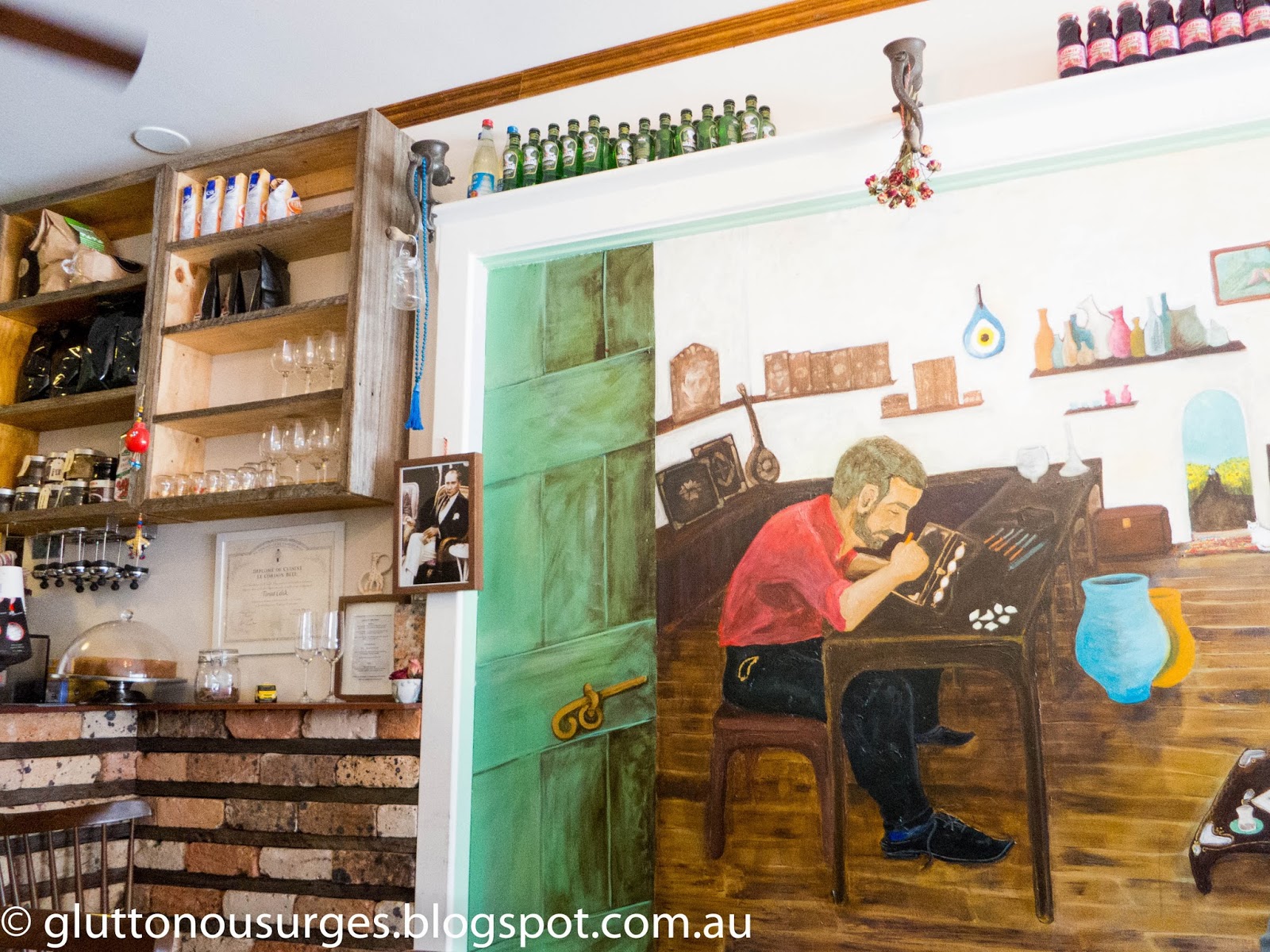 Shell remarked on the prettiness of the pink salt, but pondered about the supposed health benefits of pink salt compared to commonplace white table salt. "Does it contain less sodium?" she sarcastically queried. Amusingly, a Google search revealed numerous sites which claim that Himalayan pink salt derives its colour from its rich mineral content. Since it contains many minerals other than sodium, it is reasoned that there is a lower proportion of sodium. I'll leave it to someone else who might be more scientifically inclined to test the veracity of these statements...


Our drinks arrived. Shell had ordered the tea (the Stockholm blend, since she's fond of both vanilla and black tea) and I, the avocado smoothie. I loved the presentation of the pastel green drink. The glass straw and crushed pistachio somehow evoked notions of being healthy and environmentally friendly.

However, drinking the smoothie was not so pleasurable. I could definitely taste the flavour of honey, but the avocado, milk and yoghurt components were so rich and milky that they smothered the sweetness that should have been there. And while I loved the idea of pistachios in a smoothie, it was kind of tiring chewing on them after each sip.


On a more positive note, I was really pleased about the sucuk bruschetta. Sucuk is a type of Turkish sausage, similar to chorizo in taste and appearance. Though meant to be spicy, the heat factor was muted substantially (probably to accommodate the Australian palate). The egg was cooked to a perfect runny-yoke consistency, while the fattiness of the buffalo mozzarella cheese and avocado was interrupted by the sweetness of the sliced tomatoes. When I received the plate of 1.5 slices of toast, I was dubious about being full at the end, but it all occupied my stomach space comfortably. 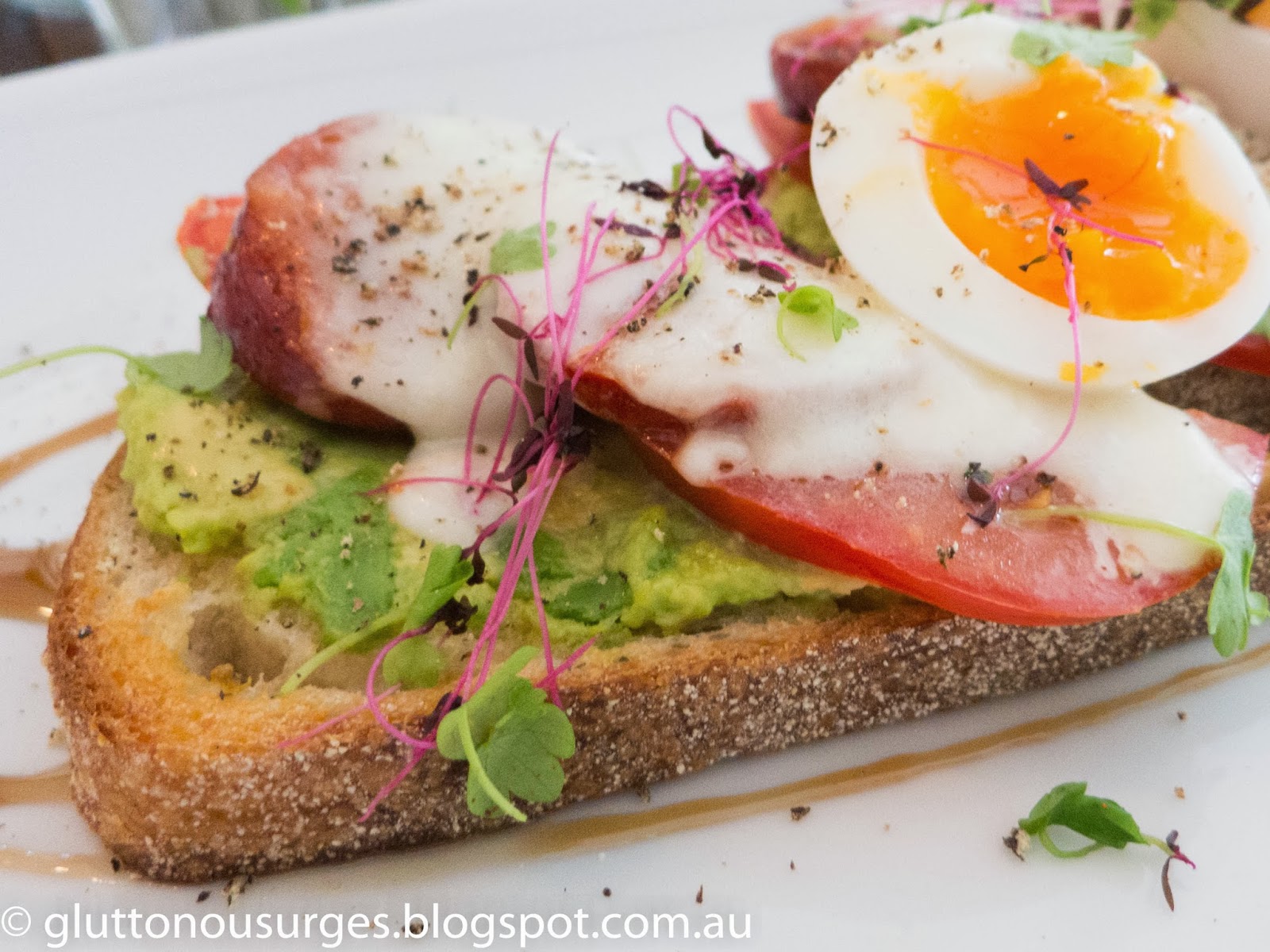 Shell had mixed wild mushroom gnocchi with a tomato-based sauce. She was a little miffed that the menu suggested that her "wild mushrooms" would be mixed in variety - her plate only contained ordinary brown mushrooms. Other than this, she was content with her meal.


I'd like to sample their meyhane dishes (share plates with wine), so I my next visit shall be at dinner time!

For a few months now I've been hearing about a fantastic little Thai place situated in what's practically my hometown. I had to search it up on the Internet, because I never actually paid attention to Khao Pla in passing! The address confused me a little because I read "Victoria Avenue" and thought it would be around the Concourse, but its shop lot opens onto Anderson Street (opposite to Bao Dao/ Moochi/ Houlihan's... which I've realised all happen to bear Victoria Avenue addresses).

Khao Pla's chef, Pla Rojratanavichai, has had the likes of Spice I Am, Mr Wong and Ms G's under his belt, which probably explains all the hype surrounding this particular eatery. It's this hype that has generated pretty consistent dinner-time queues, and due to inconvenient hunger pangs, it's taken a few attempts to actually get a table.

On the day we decided to commit to the half hour wait, we'd finished watching a movie, which meant we hadn't gone a moment without chewing on some sort of snack. Since a waiter was planted at the front of the restaurant to greet patrons, we were able to leave our mobile number with them, giving us the freedom of going walkabout to work up a bigger appetite.


Due to the minimal space, most of the tables make up one long table, which means that there's a bit of manoeuvring required to get to the benches at the wall. Khao Pla probably isn't the best setting for an intimate date/ catch-up, as you have to shout across the table to your dinner partner (which also means you can clearly hear the conversations of the people on either side of you). It didn't help that there was a large group of diners who had drunk several bottles of wine already and were guffawing loudly - though who could blame them? They were celebrating a birthday, after all.

Even with that half hour to gain precious stomach space, we were still borderline peckish, so we went with 2 dishes and steamed jasmine rice to share.

First to arrive was the crying tiger. It was char grilled wagyu beef accompanied by a generous amount of sauce. Succulent and juicy, I don't think the beef really needed the sauce, though it did provide an extra punch of sweet, sour and spicy flavours.


Second was a green chicken curry with thai eggplant, ginger, bamboo shoots, Thai basil and kaffir lime leaves. The curry was pretty standard, except it was particularly hot - when the waitress went around checking on each table, she even teased me about the crimson state of my face :(